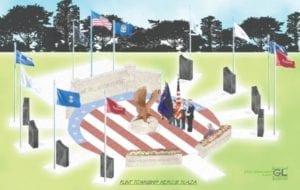 FLINT TWP. — After seeing the proposed Veterans’ Memorial/Hero’s Plaza sitting on the drawing board for about ten years, Supervisor Karyn Miller is ready to get rolling on turning the concept into reality.

So far, through donations and fundraisers, the township has raised $18,588.94 towards a building project originally estimated at about $50,000.

Miller provided information about the plaza to the township board for review. She also asked to form a committee to spearhead a renewed fundraising effort. A veteran seated in the audience immediately volunteered his services. Trustee Barb Vert also said she would serve. HealthPlus of Michigan donated $6,000 back in 2011. The township also sponsored several carnivals to raise money.

“We have had these funds a long time,” Miller said. “Those who donated would like to see an action plan … to move forward.”

Individual donations also are being sought. Part of the plan is to sell engraved bricks that will be incorporated along walkways in the plaza.

A drawing of the proposed plaza and full description is posted on the township’s website along with donation forms. It depicts a red-white-and blue emblem surrounded by markers and walkways recognizing those who served honorably in the Army, Marines, Navy, Air Force, Coast Guard, Michigan National Guard and Flint Township police and fire departments. Also planned is a Donor’s Walk area for people who want to buy a paver brick but do not meet the requirements for the Hero’s walkways.

Flags will surround the perimeter of the Hero’s Plaza and benches placed behind the rear wall will serve as a meditation area.

“We are asking the community to come together and support this memorial by purchasing paver bricks or making other tax-deductible donations and volunteering their time,” according to the posted proposal. “This project will be constructed with donated funds, labor and materials. Those who wish to donate $1000 or more will be listed on a special plaque, which will be prominently displayed.” Anyone with questions can contact Plaza Coordinator Tracey Tucker at 810-600- 3234