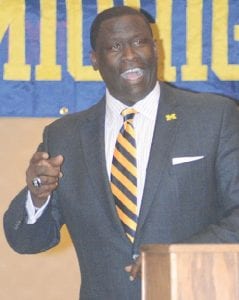 ATLAS — Because the University of Michigan Club of Greater Flint helps endow athletic and academic scholarships while also providing scholarship assistance to students at UM-Flint, its work is never done. The organization does have ways of supporting itself, though, including its Annual Sports Dinner and Golf Day at the Atlas Valley Country Club on Monday, the club’s largest fundraiser of the year.

“We really appreciate all of the generosity and energy and enthusiasm displayed each and every year. That allows our student-athletes, regardless of sport, actualize their dreams through intercollegiate athletics,” said assistant men’s basketball coach Bacari Alexander. “I remember Dave Brandon, our Director of Athletics, coming up to us at the conclusion of the Crisler Center’s opening and saying, ‘You know, I can think of over 90 million reasons you’ll love your office’. It’s real. It’s a reality we all are faced with across the country. We’re always trying to upgrade our facilities.”

Starting this event off was the morning golf, an 18-hole format. From there, raffle tickets were available at the dinner, which included the evening’s key-note speakers, Alexander and UM Associate Athletic Director for Special Projects, Bruce Madej, and was followed by a question-and-answer period, an auction and donations.

“(Upgrading facilities) is important for a couple reasons. When I was a student athlete looking at schools, the criteria was quite different. We were looking for a place that had academic tradition, athletic excellence, a coaching pedigree,” Alexander said. “If I walk into a home today with that speech, I’m sure not only would they not invite me in for dinner, they’re sure enough not going to offer dessert. Recruits today are very aesthetic. The first question they’re going to ask me is, ‘Who’s your shoe company? How many shoes do you give? How’s the track suits? What’s the color? You need to tone down the yellow’. I said, ‘It’s maize, son’. He said, ‘Yellow’. I said, ‘Ok, yellow. Long as you come to Michigan, it’ll be whatever color you want it to be’.”

Earlier in the evening head football coach Brady Hoke and head softball coach Carol Hutchins were also on hand. Combine that with the fact that the UM Club of Greater Flint has been around for more than 40 years and it’s no surprise this event raised over $30,000.

“Coming to Flint is one of the highlights I’ve had over the last 30 years at the University of Michigan. When we’re talking about facilities and Schembechler Hall and the money you just donated, you know that we’re doing some major work on facilities,” said Madej. “One of my first major projects that I had was to make sure the Crisler Arena concourse was looking good. It was my project that I was really able to put my stamp on and I was really happy the way it turned out. It was beautiful. We have all of our sports represented there. We have interactives. We have the history of each of the sports. We have the hall of honor, that for the first time is now being displayed, and this is just going to grow.”

Having joined the University of Michigan in 1978 as its Media Relations Director, Madej held that position for about 30 years before David Brandon moved him over to the special projects department upon his arrival in Ann Arbor. That puts Madej right in the eye of the storm that is the expansion of Michigan’s athletic facilities, a challenge that might be slightly larger in scale than most people realize.

“We have already torn out 7,000 feet of Schembechler Hall down State Street. That whole front area where the old museum was is now gone. We will have 14,000 square feet and we’re literally going to make Schembechler Hall the gateway to Michigan football like we have made Crisler Center the gateway to Michigan basketball,” Madej said. “You can see what we’ve done with the (basketball) program. You can see what those coaches and players have done, and you know what it means. It’s going to be fantastic.”