This tradition is revived and kicking 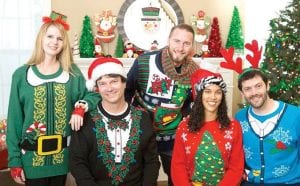 FLINT TWP. — Things were expected to get pretty ugly this week at the township’s second annual Unofficial Employee Christmas Merrymaking Party. But it’s all in good fun.

Guests (employees, retirees and significant others) were asked to wear their best “merrymaking shirt or sweater.” In other words, the Ugly Sweater Party trend is alive and well in Flint Township.

For many Christmases past, holiday sweaters were shunned and even ridiculed as tacky. But thanks to more and more companies embracing the ugliness of it all, this long overlooked holiday tradition is back in style.

Uglychristmassweaters.com, a Walled Lake-based company, sells its products online and at mall kiosks during the season. There’s one in the Macy’s wing at Genesee Valley Center shopping mall.

Spencer’s Gifts, which also has a Genesee Valley store, sells ugly sweaters and DIY kits and also sponsored Spencer’s Gets Ugly, a social media contest from Dec. 1-14 that offered a chance to win a $200 gift certificate. 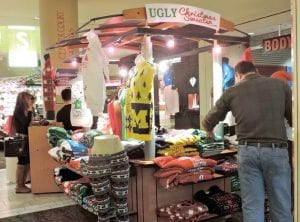 Ugly Christmas Sweaters, a kiosk at Genesee Valley Center, is one of several local places to get your ugly on.

Party City, which has a store on Miller Road, in the Genesee Crossing shopping plaza, recently posted an ad featuring its assortment of ugly, humorous and sometimes naughty, sweaters.

Like beauty, ugly is in the eye of the beholder. Many of these “unloved” sweaters end up re-gifted or donated which is why the Goodwill store on Miller Road had enough of them recently to create a special sales rack.

Yet another resource is www.UglyChristmasSweaterParty.com, an online mega store opened in 2009 that is home to 10,000 ugly, vintage, tacky and festive Christmas sweaters. Operated out of a small warehouse in Crown Point, Indiana, about 30 minutes outside of Chicago, they ship their wares all over the world – even to military battleships, according to their web site.

Ugly holiday sweaters date back to the 1980s, according to uglychristmassweaters. com. Be it a well-meaning gift from a doting mom or a cruel prank, these sweaters usually were not popular. 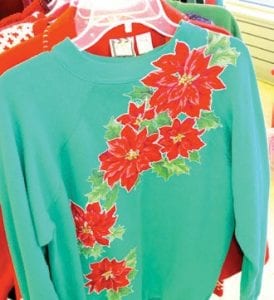 The Goodwill store on Miller Road recently offered this colorful assortment of holiday sweaters for sale.

But now, “they are making a comeback in a huge way,’’ according to uglychrismassweaters.com, which has been featured in several national publications.

They have even added leggings to the product assortment, featuring dashing designs of reindeer and snowflakes.

They have 3D sweaters and sweaters with sports themes. There also offer ugly sweater kits with materials for creative types who want to make their own unique sweater. There are even a few ugly Christmas blazers for those who want to go all out.

Unfortunately you are too late for National Ugly Christmas Sweater Day which was December 12 but there’s always next year.

And of course, wearing your ugly sweater on Christmas Day is a fun way to showcase your ugly best.