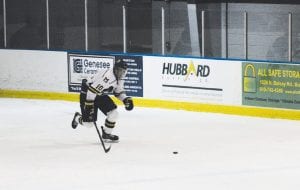 UM-Flint’s Jordy Makranyi pursues the puck during a 9-0 win over Toledo.

FLINT — The success that the University of Michigan-Flint men’s hockey team has put together this season continued with last weekend’s trip to Holy Cross College at Notre Dame, where UM-Flint pulled out two key victories.

The first of the two contests faced off on Friday, Nov. 21, with Michigan-Flint winning in a thriller, 5-4. Holy Cross, though, began the game by scoring two first-period goals from Tomas Dychtiar and Zachary Bourcier. UM-Flint, however, made some adjustments in the locker room and came out on fire.

In fact, Michigan-Flint went on to score four unanswered tallies to grab a 4-2 edge. Swartz Creek grad Brandyn Matte got the streak started at the 5:05 mark of the second period with help from Connor Houle and Nicholas Karstens. Matte then got right back to work at 11:07 of the second frame, assisted by Robert Hatton and Mark Look.

Less than two minutes later, Michigan-Flint grabbed its first lead of the night as Goodrich’s Jake Brejnak rippled the mesh from Look and Matte before Jared Coulter doubled the advantage with only three minutes remaining in the period. Holy Cross finally responded toward the end of the second as Nick Pines put an end to the UM-Flint run.

Nicholas Kozoro found the back of the net near the midway point of the third period in what would turn out to be the game-winning goal as Bourcier would be the only one to score for Holy Cross for the remainder of the game.

Saturday’s contest was just as exciting with just a little less scoring. Holy Cross was the first to put one past the goaltender thanks to Bourcier. Late in the period Lapeer’s Nathan Robson, with help from Lapeer’s Brian Gibbons and Swartz Creek’s Andrew Lay, scored to draw even before Coulter’s go-ahead goal at the 17:56 mark.

Nicholas Brazeal increased the edge to 3-1 in the second period, assisted by Look, before Holy Cross’ Bradley Kolcz brought it back to a one-goal game. Lay, however, put the game out of reach with a third period tally to clinch the win.

Now at 12-5 overall, UM-Flint looks to continue its winning ways on Friday, Dec. 5, when it hosts UM-Ann Arbor’s Div. 3 team at Crystal Fieldhouse in Burton.