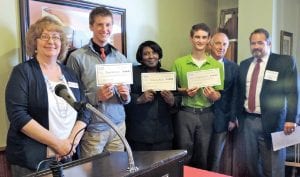 WFBA scholarship committee presented three annual scholarships to area students last week. Right, UM-Flint Chancellor Susan Borrego spoke about the importance of higher education and the importance of partnership with government, business and the community to improve the quality of life in Michigan.

FLINT TWP. — “It is not where you start but where you end up,” said Wanetta Reid, winner of this year’s Adult Learner Scholarship presented by the West Flint Business Association (WFBA).

“I have been on this journey for a long time but here I am,’” Reid said of her 10-year pursuit of a college degree which she expects to complete in 2017.

Susan Borrego, chancellor of the University of Michigan-Flint, echoed Reid’s sentiment, recounting hardships and scholarships from her own young adult life.

Borrego said she was packing up to go home from college when she was saved by a $200 scholarship from a man who lived in a 450 square-foot house and sold Fuller brushes for a living. Many have helped her along the way but one misstep and her life could have gone in another direction, said Borrego, who was the guest speaker at the WFBA annual scholarship presentation last week. 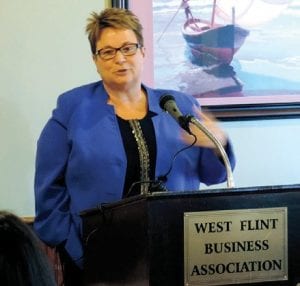 Formed in 1989, the WFBA is made up of about 100 members from the business, professional and civic community, mainly in Flint Township. Each year the group awards three $2,500 scholarships.

It is a always hard to choose only three winners from many worthy applicants, said John Folts, chair of the scholarship committee and a 1994 WFBA award winner.

Reid has been a finalist twice before winning this year, Folts said. She is a junior at Baker College working toward a bachelor’s degree in Early Childhood Education with aspirations of becoming a pre-school teacher and eventually opening a child-care center.

Trent Schmitz, a senior at Hill-McCloy High School in Montrose, is the winner of the WFBA technical scholarship, funded this year by Curbco and the Swartz Creek Chamber of Commerce.

Schmitz plans to attend Lawrence Technological University in the fall, majoring in Architecture and Interior Design.

“There is a huge demand for trades jobs,” said Keith Kirby, president of Curbco, who presented Schmitz’ award. It is one of two scholarships Curbco awards each year to support interest in trade careers, he said.

As a member of the GISD Superintendent’s Advisory Committee, Kirby took the opportunity to make a pitch for the “great things” happening at the Genesee Career Institute (formerly Genesee Area Skill Center). Besides planned facility improvements, the Institute is partnering with institutions of higher education to expand educational offerings.

He asked WFBA members to help spread the word to young people that the skill center of the past has been renovated.

“There are jobs in the trades that are cool jobs,’’ Kirby said.

In her comments, Chancellor Borrego spoke of the university’s $80 million economic impact on the community in 2014 and the interdependency of the two.

Introduced as a “passionate advocate and national leader of student success,” Borrego said UM-F will be launch a $40 million capital campaign in the fall with hopes of putting at least half the funds towards scholarships for students who might otherwise be “priced out” of going to college.

UM-Flint sits in the middle of the pack tuition-wise and distributes about $7 million in financial aid, she said.

Supporting student success is one of her key priorities going forward, she said.

“It isn’t about where you start, it is where you finish and I am not finished yet,’’ she said of her long-term plans for the UM-Flint campus.