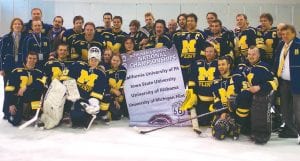 SPRINGFIELD, MO — The 2012-13 campaign was quite a successful one for the UM-Flint hockey team. Michigan-Flint racked up an astonishing 27 wins in 34 regular season games and cleared itself a path to the national tournament after a strong showing at the regional. That impressive streak continued at nationals, however, UM-Flint fell just one win short of the title with a 4-1 loss to Adrian in Saturday’s championship game.

Until the national title loss, UMFlint was undefeated at the national tournament, sweeping pool play and coming out with a crucial win in the semifinals. It began last Tuesday with a 5-2 triumph over California University of Pennsylvania. Nick Karstens and Burton’s Matthew Murdock led the charge with each recording a goal and an assist in the win. Lapeer’s Nathan Robson rippled the mesh in the game, as well, along with Mark Look and Tim Donnelly. Swartz Creek’s Kirk Allen was stellar between the pipes, turning aside 46 shots.

Allen continued to show his prowess in goal, stopping 34 shots and earning the shutout in a 3-0 win over Iowa State last Wednesday. Grand Blanc’s Dan Cowan topped the scoresheet with two goals and Robson tickled the twine for the other goal in the dominant, 3-0 win. Nick Manley added a helper to the effort.

Michigan-Flint’s next win would be its most dominant of the tournament, crushing Alabama to close out pool play on Thursday, 7-1. Allen once again performed exceptionally with 32 saves, but offensively, Cowan and Robson put on a show, with each tallying two goals and an assist. Look also picked up two goals and Murdock lit the lamp once with a helper. Will Dawson chipped in by assisting on four of UM-Flint’s goals.

That tear in pool play led Michigan-Flint to Friday’s semifinals, where it played arguably its most exciting game of the tournament, a 5-4 edging of Davenport. Burton native Daniel Smith was outstanding, scoring twice while assisting on two others. Cowan added a pair of tallies and Murdock found the back of the net once while assisting his teammates on two of their goals. Allen put forth possibly his most impressive outing of the season with an eye-popping 62 saves.

Although it wasn’t able to capture the national crown, the UM-Flint hockey team exceeded expectations and had an unbelievable season, which was historic for the young program. With nearly every player being a local product, Look and Dalton Hammond once skated for the Flushing/Carman-Ainsworth program.