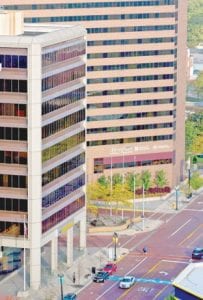 Uptown Reinvestment Corporation gave the 16-story, 340,000-square-foot building to UM-Flint with support from the Charles Stewart Mott Foundation, which waived the balance of loans owned by URC to make the donation possible.

The donation was announced in December 2015 contingent upon the completion of due diligence and the property transfer was completed Thursday, March 31, 2016. The University’s $6 million purchase of the FirstMerit Bank tower next door to Riverfront Center also was completed March 31.

Combined, the two buildings add 500,000 square feet to campus, increasing the cumulative square footage of campus buildings by more than 25 percent and providing much needed additional space. It is the first addition of academic space since 2002, when the William S. White Building opened.

“We saw an opportunity as a campus to expand programs and opportunities for our students while at the same time deepening our investment in our community. As an anchor institution for the City of Flint, we are vested partners contributing to the life, vibrancy, and economic development of our community,” said Chancellor Susan E. Borrego.

The expansion of on-campus housing allows the University to offer some specialty living options, including an environment geared specifically to juniors and seniors as well as the option for couples’ housing, which is available to married students or students with domestic partners.

Riverfront Residence Hall offers all the conveniences of living on campus and the option of purchasing a meal plan. It features housing options ranging from a one-person studio to a five-person suite. All rooms are fully furnished and include kitchens with a microwave, stovetop and refrigerator, private bathrooms with tubs, as well as on-site laundry facilities.

The Riverfront, constructed in 1981 as a Hyatt Regency Hotel, is a landmark downtown Flint building. URC purchased the facility, which was then called the Character Inn, in 2009.

The purchase and subsequent renovation were supported through $27 million in repayable grants made by the Mott Foundation to URC’s affiliate, the Foundation for the Uptown Reinvestment Corporation.

At the time the sale was announced, bank officials said the employees currently in the building would be relocated to the bank’s west and south towers, which would allow staff to work closer together and make operations more efficient and effective.

FirstMerit and Huntington banks jointly announced in January that the two entities would merge in the third quarter of 2016. — G.G.