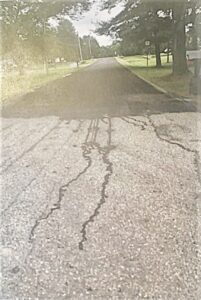 BURTON — Mary Mitchelson said she just wants the road in front of her property to look like the rest of Shannon Road, but because the road was extended onto her property for a turnaround the city says its unable to finish the chip and seal of the roadway.

Mitchelson, 87, has lived at her Kilarney Park home for 55 years, but recently, when Shannon Road had a chip and seal application done to it, the contractors stopped at her mailbox, failing to complete the rest of the street – which is a turnaround where the street ends.

Years ago, possibly as far back as the Richard Wurtz administration, Burton’s first mayor, Mitchelson said the city asked to use part of her property for snowplows, garbage trucks and emergency vehicles to turn around.

She said she and her husband, who has since passed away, agreed and someone – she believes it was the city – fashioned a turnaround there so vehicles would not have to use the Mitchelson’s driveway to turn around.

So, when the recent chip and seal application was done, Mitchelson said she was surprised when the contractor stopped at her mailbox and did not finish the rest of the street.

Charles Abbey, director of the Burton Department of Public Works, said the contractor couldn’t continue from Mitchelson’s mailbox because the rest of the road, such as it is, is located on private property – part of which is owned by Mitchelson and part by other property owners in the neighborhood.

“For 55 years I’ve been there, this is the first time I’ve been told I was driving on private property,” said Mitchelson, when she recently addressed the city council at its Aug. 16 meeting. “The deed says it’s my property. I called the mayor asked someone to come look, but no one came.”

She said she took the matter up with members of the city council and three of them came out to look at the road and Mitchelson’s property.

“I’m asking the council to look into this,” said Mitchelson. “I’m upset I didn’t hear from anyone but three councilmen.”

Councilwoman Tina Conley, who visited Mitchelson’s home and looked at the road, said she wants to know the answer too because it does end at her mailbox.

“When she gave her land for a cul-de-sac by Burton, she said she let Burton use it, why wouldn’t you do the cul-de-sac for her when the whole road was done?” said Conley. “I think this is terrible.”

Abbey said it was done many years ago under the Wurtz administration and the portion of road in question was not built to the road’s specifications. He said he has been out to the property several times and said the reason the reason the contractor only went to Mitchelson’s mailbox is because everything beyond that is considered private property and it is against the law for the city to do work on private property.

As for the turnaround, or cul-de-sac, Abbey said he’s not certain on how that came to be because there are no records of it, so he said he doesn’t even know if the city created it or not.

“I didn’t say the city put that in. It happened when it was paved years ago… under the Wurtz administration. It shows nothing on the plat maps,” said Abbey. “It shows that belonged to the property there, but now (the pavement) has deteriorated and fallen off.”

Abbey said the DPW doesn’t have the right to go on private property but adds he doesn’t have a problem working something out with the property owners if the council approves.

“It isn’t our desire to hurt Mrs. Mitchelson, I understand her concern. If you look at her driveway it looks like it should be part of that because it is off at an angle,” he said. “But the plat map shows that’s private property and we don’t enter private property for public road projects – period.”

Abbey agreed it was probably made into a cul-de-sac years ago to accommodate emergency services and the DPW plows.

He questioned whether the city could write a document where Mitchelson turns over the property to the city. Abbey said that wouldn’t be possible because she only owns a portion of the property in question.

Attorney Amanda Doyle recommend the city do a title search, which would cost some money, but it would allow someone who has the expertise and knows the history to provide council with an answer.

The council decided to wait until the next regular meeting to see if anything can be worked out between Mitchelson and the administration before taking action to start a title search.

“She wants her road to look like the rest of the road, I get that,” said Abbey. “Let’s try to achieve that right now.”