Each child received a scarf, mittens and hat just in time for the colder weather.

Starting in April the congregation of Hope United began knitting, crocheting and collecting sets for all 650 students.

At its December 15 meeting, the C-A school board gave special recognition to the church for its generous contribution. 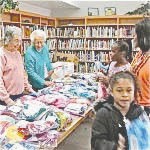