University of Michigan-Flint runs record to 10-4 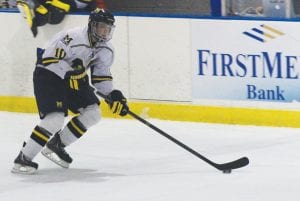 UM-Flint’s Jordy Makranyi skates through the neutral zone during UM-Flint’s win over Toledo on Nov. 7.

FLINT — The University of Michigan-Flint hockey club has been quite successful in its short history. In fact, just two years ago, Michigan-Flint played for an American College Hockey Association Div. 3 national championship. This season, UM-Flint stands at 10-4 and several Grand Blanc and Goodrich grads have contributed in a major way.

UM-Flint, currently in fifth place in the North Region in the ACHA’s Div. 3, has put up some big numbers so far, including an 11-0 win over Indiana- Purdue-Fort Wayne in the season opener on Oct. 3.

The next night, against the same opponent, victory wouldn’t come as easily, but it still arrived in the form of an 8-7 win in overtime. Their first loss of the season didn’t occur until Oct. 10, falling in the home opener to Calvin College, 4-1.

Recently, Michigan-Flint has been seemingly unstoppable, stringing together five consecutive wins. The first came on Nov. 1, winning at home over Lawrence Tech, 5-0, before trouncing Toledo the following week, 9-0. UM-Flint topped Toledo once more the next night, 5-1 and knocked off Saginaw Valley State on the road on Friday, 9-4.

The team seems to be on a great pace and is made up mostly of local products. Other area players on the team include Lapeer’s Nathan Robson and Brian Gibbons, Grand Blanc’s Cody Damon, Daniel Cowan, Matthew Kraemer, Ian Roberts and Thomas Jackett, Goodrich’s Robert Hatton and Jake Brejnak and Swartz Creek’s Andrew Lay, Nicholas Karstens and Brandyn Matte.