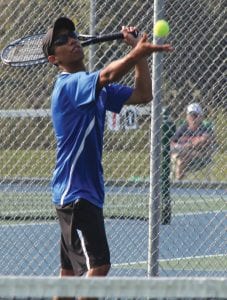 Carman-Ainsworth’s Chris Crowder has a tough road ahead at No. 1 Singles in regional play today.

FLINT — Carman-Ainsworth’s tennis team has been a little up and down this season.

The Cavaliers have a 6-9 overall mark and are 2-2 in the conference so far this season. Their biggest victory of the season came against Flint Powers Catholic.

“Our best match of the season was a win over (Flint) Powers (Catholic), 7 to 1,” Cavalier coach Robert Chunn said.

But, those marks don’t mean that Carman-Ainsworth can’t make some noise at the upcoming regional tournament.

On the contrary, the Cavaliers have the potential to wreak havoc at the proceedings. All four of Carman- Ainsworth’s Singles players and its top Doubles tandem all made the All-League team, which means there’s plenty of talent that will take to the court.

No. 1 Singles player Chris Crowder has a 7-11 overall mark this season, but has been a little streaky this season.

He began the year with four straight wins, then lost two sets, won another, then dropped five in a row. He has, however, won two of his last six heading into the regional competition.

No. 2 Singles player Noah Reed has a 9-6 overall mark. Reed also began his season on a hot streak.

He won his first three matches before dropping four of his next five. Reed, however, has righted the ship by winning five of his last seven matches.

No. 3 Singles player Damen Haley is 8-10 overall this season. Haley, like the other two players ahead of him, started the year on a roll.

He won his first four matches of the season. Since that time, Haley has spliced four wins in between 10 losses.

No. 4 Singles player Mark D’Angelo may be the hottest Cavalier coming into regional play. D’Angelo has won four of his last seven matches after dropping six in a row.

Carman-Ainsworth’s No. 1 Doubles tandem of Kyle Fluker/Vlad Li are also on a bit of a roll heading into postseason play. The duo have posted four of their seven wins over their last seven matches.

The No. 2 Doubles duo of Luke/Ethan Moore have been struggling of late. After taking five of their first 13 matches, the pair have dropped five in a row.

The No. 3 Doubles team of Jaylen Bransfort/Evan Walker have been playing their best tennis late in the season. They have won four of their last seven matches.

Jared Young/Christian Jones have equalled Bransfort and Walker. They have also won four of their last seven matches and are 7-11 on the season.

But, despite all their ups and downs, the Cavaliers have the potential to cause plenty of problems for the opposition at the regional competition.

“The team continues to practice hard and prepare for the tournament,” Chunn said.