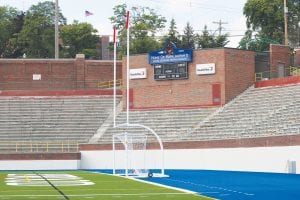 FLINT — After a yearlong hiatus, high school sports will finally return to Flint’s historic Atwood Stadium this fall, following a series of upgrades at the facility. A year ago, no high schools would agree to schedule any contests at Atwood due to the deterioration of the highly outdated Astroturf, which was installed in 1995.

“It’s great for, not just Kettering, but the whole community,” said Jack Stock, director of external relations for Kettering University. “We got support from so many sources and I attribute it to people having a really good feeling about the stadium as a whole.”

After purchasing the stadium from the city of Flint in 2013, Kettering University began a series of renovations last fall, beginning with the upgrading of the concession stand, as well as the east bathrooms and patching some of the crumbling concrete along the stadium’s steps.

Things really began to progress, though, once the snow melted in the spring. It started with tearing out the old turf and surrounding pavement, giving the wall around the field a fresh coat of paint, and then the installation of state-of-the-art field turf, which is now in place and features the Kettering Bulldog logo.

“Well currently, we’re over $2 million (spent on upgrades), but there are still repairs that ideally we’d like to have,” added Stock. “It’s got the brand new field, it’s got renovated restrooms and concession area, it’s got a renovated locker room area, but there’s a lot of work to do still. So, we’re over $2 million but we’ve got another $700,000 worth of work to do on it, so we’re continuing to seek support.”

Kettering has also put up some new signs near Atwood and cut down several of the dead trees that once surrounded the stadium, making it more visible from Water Street, which leads into Atwood’s parking lot.

The renovations as a whole are expected to be completed in time for the kickoff of high school football on Aug. 27. The first game to be played on the newly installed surface will be the annual rivalry contest between Flint Beecher and Flint Northwestern on Aug. 27, followed the next night by a non-league battle between Kearsley and Flint Southwestern. Southwestern, Northwestern and Flint Powers Catholic have already scheduled several home games there for the fall.

“There’s two games that the Flint Community Schools will play at Houston Stadium, but they’ll have all of the rest of their home games at Atwood,” said stadium director John McGarry. “There’s going to be two Powers home games there and all the other Fridays it will be the Flint Schools (Northwestern, Southwestern) playing there.”

Field goals will be kicked through brand-new goal posts and the locker rooms have been spruced up, as well. Football, however, won’t be the only sport being played inside Atwood this fall. Kettering officials made sure to add both soccer and lacrosse lines to the new turf, making Atwood a more diverse facility. In fact, the soccer nets have already come in, currently sitting under the new football goal posts.

“Powers is going to be playing soccer there, both their varsity and JV teams,” McGarry added. “We’re getting a lot of general inquiries (from other schools), but we’re not trying to pursue that until the work is done and we get a season under out belt, but we’ve got quite a few games between high school soccer and football this fall.”

There is a lot of history at Atwood Stadium, dating back to its opening in 1929. Atwood has played host to rock bands such as The Who and was once the setting for speeches from former Presidents Franklin D. Roosevelt and John F. Kennedy. Minor-league baseball was based there in the 1940s and 50s with the Flint Gems, Flint Indians and Flint Arrows franchises.

The Arrows were the Detroit Tigers top minor-league affiliate during that time; often-brining Tigers spring training games to Flint. UM-Flint football played its first few seasons there and it has served as the home field for many semi-pro football teams including the current Flint Fury.

Former Grand Blanc star and Flint Southwestern graduate Mark Ingram tore up the turf in his senior season with the Knights, setting many city rushing records after transferring from Grand Blanc and eventually winning a Heisman Trophy at Alabama.