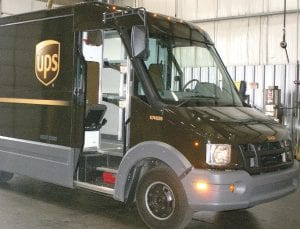 FLINT TWP.— A prototype design for UPS trucks is being road-tested in the Flint area.

Flint is one of five cities chosen to test the CV-23 composite panel truck from Utilimaster/Isuzu which is a lighter weight more fuel efficient vehicle than UPS’ P70 diesel truck.

The test vehicle is assigned to a route in Lapeer County but based out of the UPS hub off Bristol Road. The Flint-area route was chosen because it is a longurban route and because it is not far from the American Isuzu Motors branch headquarters in Plymouth, according to a press release.

Other test routes were chosen for extreme conditions UPS trucks encounter. Lincoln, Nebraska was chosen for its rough back-country roads.

Albany, New York was chosen for its tough winter conditions.

Tucson, Arizona was selected for the extreme desert heat and Roswell, Georgia for accessibility to the UPS corporate automotive department.

The route in the Flint area has a number of rough roads to test the vehicle’s long term durability, said Michael French, UPS Public Relations Supervisor. He defined longer routes as averaging 150 miles round-trip per day. Testing began in April and will conclude at the end of the year to incorporate the busy holiday delivery season.

“We are putting them through daily delivery routes to test their fuel efficiency and durability,” French said.

If the truck passes the test, UPS will evaluate the possibility of additional CV- 23s for permanent use in our fleet, he said.

The 150-horsepower trucks have a four-cylinder Isuzu engine and a sixspeed automatic transmission which is smaller than a traditional UPS diesel engine and aimed at reducing fuel costs. The truck also is about 1,000 pounds lighter due to its composite body panels which are dent-resistant, can’t rust from road salt and easier to replace.