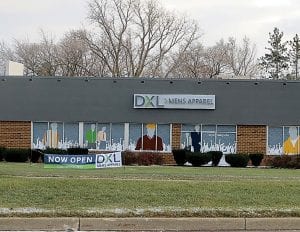 Massachusetts-based DXL is a superstore serving big and tall men. It offers an upscale one-stop-shop array of merchandise designed to give big men more fashionable choices not typically available at other retailers. More than 2,000 private label and name-brand wares include manufacturers and designers such as Polo Ralph Lauren, Michael Kors, Calvin Klein, Tommy Hilfiger and more.

The 10,500 square-foot Miller Road store was formerly a tile store and had been under renovations for several months.

Management did not respond to a request for information about how many workers were hired.

DXL is a new company concept combining the traditional fare of Casual male stores with the higher-end designer names sold at Rochester Clothing, according to information on the company website.

The first DXL stores opened in 2010 and is now in transition to phase out Casual Male XL stores. The long-range goal is to have 215-230 DXL stores open by the end of 2015.