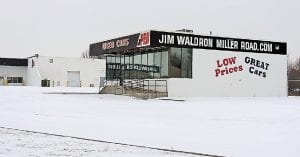 FLINT TWP. — About this time last year, the lot at the incoming Jim Waldron used car dealership , 4140 Miller Road, was full of vehicles and the hope of a new lease on life for a vacant township property.

Now the lot is empty again and the business appears to be closed. Jim Waldron Jr., co-owner of the business, did not respond to a request for details.

Tracey Tucker township economic enhancement director, said it was her understanding that the property was being leased and possibly, for whatever reason, the owners decided not to renew the lease.

For many years previously, the dealership operated as Genesee Valley Chrysler- Dodge-Jeep-Ram and prior to that was Chinonis Chrysler Plymouth Dodge.

Genesee Valley closed in January 2012 and moved to Grand Blanc after being purchased by the Al Serra Auto Group.

Waldron, whose family owns Jim Waldron Buick-GMC in Davison, said in an interview last December that used car dealership was an independent operation that would sell all makes and models of used vehicles.

He said it would be a “nontraditional” used car lot with 300-400 vehicles in stock.

“Vehicles will be priced aggressively at a rock-bottom price that will leave no room for haggling,” he said.

Waldron said Miller Road was chosen because of its high visibility and was already set up as a car dealership.

A website at www.jimwaldronmillerroad.com was still operational as of last week but there are no cars on the lot and a large “open” banner sign is peeling off one of the buildings.