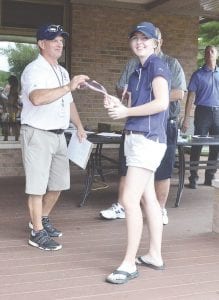 LAPEER – Battling an all-day threat of rain that never materialized, Utica Eisenhower took home first in the annual Lapeer girls’ golf Tune-up at the Lapeer Country Club with a 354 last Friday. Fourteen teams were supposed to compete, but Flushing and Lutheran North dropped out at the last minute.

Finishing second was Rochester Adams with 362 and in third was Lake Orion, which had its four-year Tune- Up winning streak snapped after finishing the day with a 380. Goodrich finished fourth with a 382, Birmingham Seaholm was fifth with 395, Saginaw Heritage sixth with 416, Cranbrook seventh with 418, Lapeer eighth with 425, Oxford ninth with 447, Rochester 10th with 464 and Utica 11th with 513. Brandon also competed but did not record a team score due to only having three golfers.

When asked how the day was going midway through the tournament, Lapeer coach Steve Carlson, who helped host the event, was optimistic in his outlook.

“It’s is going good because it hasn’t rained yet,” said Carlson. “We have 12 teams this year, which is fine. We have a pretty good mix of teams. It’s exciting for us because we host it and it’s usually our first tournament of the year. We don’t have quite as many teams, as I said before, but this year I think it’s going good.”

The looming threat of rain throughout the afternoon proved no problem for all golfers in the field, though Carlson pointed out some scores will be a bit higher due to the day’s pin placement.

“I’d say the course is in good shape,” said Carlson. “One thing I did notice was that there are a couple of pin placements that are really difficult, so some of the people are putting a little bit more than normal. But I think it was set up fair, the course is in great shape, just a couple of tough pin positions.”

Goodrich was led by Elizabeth Gibbs, who carded an 81 on the day for second place individually. Amanda Miller added a 97, Emily Swett finished with a 98 and Ashley Madill had a 106. Ella Locey also competed for the Martians, carding a 107.