Vehicle City Diner getting ready to rock and roll 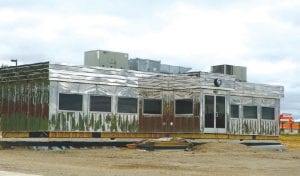 FLINT TWP. — Plans are moving ahead for additions to the Vehicle City Harley- Davidson complex , 2400 Austins Parkway, including the recent arrival of a 1950s-style diner.

The shiny chrome diner was purchased in the Lansing area and delivered early last month and set on its foundation, said Nikole Fox, who is in charge of marketing and advertising for Vehicle City.

It is now is being renovated. Bigger than its looks, the motorcycle-themed diner will seat 60, she said. It will have classic 1950sstyle retro flooring and red seats.

No firm timeline is set for the opening of the diner but tentatively is targeted for spring 2014, Fox said.

Besides the diner, the development will include an outdoor patio and lounge, a bandshell and tiered grass seating area, a demo track for all terrain vehicles (ATVs) and dirt bikes and new parking and landscaping.

It is being built on a lot bordered by Miller Road and the I-75 freeway in front of the Harley-Davidson dealership. The parcel was purchased last year from the Patsy Lou Williamson dealership which operated it as a used luxury car lot. The car dealership was razed late last year.

Tracey Tucker, township economic enhancement director, said the work also will include sealing off several driveways, some green space and installing wrought iron fencing around the area. During demolition, some issues arose about a retaining wall but have been resolved, she said

“It should be nice when it’s done,’’ Tucker said.

Meantime Vehicle City is moving forward with it plans to become a tourist attraction.

Events are being planned for every weekend during the summer, Fox said. They host a bike night every Friday and on June 8 will host a Summer Kick-off Party from 1-7 p.m. that will include live bands, tattooing, bike washes and several other indoor and outdoor activities, Fox said. The special outdoor event was approved by the township board Monday night. Originally fireworks were planned but the request for permit was withdrawn until a later date, Fox said.