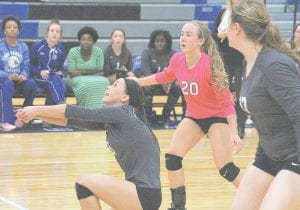 FLINT TWP. — Lack of experience will not be an issue for the Carman-Ainsworth volleyball program. The Cavaliers (6-30-1 in 2016, fourth in SVL South Division) have 10 players returning, including the duo of four-year varsity players Katie Speaks and Morgan Sherrer, who finished the 2016 season on the first and second All- Saginaw Valley League teams, respectively.

Speaks and Sherrer, platooning at the libero position and as defensive specialists, are expected to lead a veteran-laden squad with 10 returning players and only one newcomer, junior Areyana Harrison.

Coach Barb Hurand, who is entering her 23rd season, describes Harrison as a “jack of all trades.”

“She’s very athletic, versatile and will be a player I can put in multiple positions when needed,” said Hurand. “She can set, hit, and play defense.”

Also returning are junior outside hitters Diamond Lester, Hannah Thurston and middle hitter Angel Eubanks, all who have played on the varsity squad for the past two seasons. Lester was a 2016 All-Saginaw Valley League second-teamer, and Eubanks was awarded honorable mention.

For the first time, the SVL is divided into two separate divisions with a league tournament crowning the outright champion. Hurand predicts that this will lead to longer travel and late nights for the Cavaliers.

Hurand noted the team’s biggest strength will be chemistry, stemming from the in-game production of Speaks and Sherrer, as well as their leadership roles off the court. — J.O.