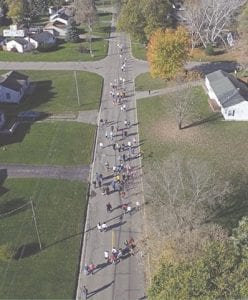 BURTON — Over $20,000 has been raised for the Disabled American Veterans (DAV) through the Veterans Honor Run since it started, according to Jim Craig, race director. Hurley Medical Center has been a major contributor.

“Our goal is to put on a quality event Nov. 3 and show the city in a good light,” Craig said.

This year’s first 250 walking or running entrants receive a special edition dog tag compliments of City Council President Steve Heffner. A dog tag is a common name for tags worn by military personnel primarily used for identification of the dead. Heffner served in the U.S. Marines.

“He’s got a passion behind supporting his fellow veterans,” Craig said.

The GORUCK or backpack division has been added to the race for the first time this year. Racers in this division must run with a backpack with weight. The race committee adds new elements to the race that are the right tone for veterans, according to Craig. The expertise of Robert Wheeler of Team RWB (Red, White, Blue) was sought after to help plan the Veterans Honor Run GORUCK division. Wheeler runs several races involving rucking.

The Veterans Honor Run offers a new challenge this year.

Rucking is the foundation of special forces training. Green berets are well versed in shouldering heavy rocks through cities, mountains, jungles and deserts in war and peace.

“Rucking requires strength, endurance and character and builds it, too,” Wheeler said.

“Personally, rucking takes me back to the days in the army, challenging myself to do more, be a better teammate and lead my team when called up,” Wheeler added.

Wheeler said rucking has helped him get a stronger back and improved posture.

“We’ve always had people in the Veterans Honor Run who would run with a ruck pack,” Craig said. “Some would run in full firefighter gear. We’ve had people who have challenged themselves. We thought why not have a division for them.”

In addition to the 11K runners getting a challenge coin, GORUCK division 5K runners will receive one this year. The challenge coin also has a root in the military.

The honor guard of the VFW Post 2777 will perform a military proper opening service.

The race did go through Kelly Lake Park, but the route has changed. The new route allows public safety officials to provide a safer course in which they can manage the traffic flow. The 5K race begins at Blessed Sacrament Church, goes north across Lapeer Road and into the subdivision, will comes out Vassar Road and back down Lapeer to Blessed Sacrament. When the 11K goes down Vassar, it will go all the way to Atherton, then Atherton west to Belsay, then N. Belsay to a subdivision off Belsay then back up into Roberta.

Medals designed with the Burton Race Series logo will be awarded and special race bibs, shirts and oral recognitions are given to veterans and those currently serving in the military. A post-race pasta meal with salad and breadsticks from Black Forest Catering of Frankenmuth will be served. Details: veteranshonorrun.com.