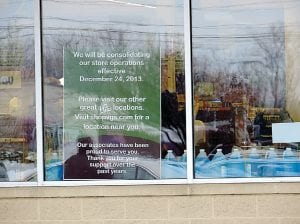 Signs posed at VGs on Corunna Road indicate it will close early on Christmas Eve.

FLINT TWP. — Signs posted at the VGs store, 5080 Corunna, Road, give notice to customers that it will close permanently at 4 p.m. on Dec. 24, moved up from a Dec. 28 closing date originally announced in early November.

The posted notice calls the closing a “consolidation” and invites customers to shop at remaining area VGs stores which are in Davison, Clio and Fenton.

The VGs stores in Burton and Shelby Township near Detroit also are closing on the same day.

Spartan-Nash, the newly-merged parent company of VGs, based in Grand Rapids, is not responding to requests for information about the closings or number of employees affected.

As of late last week, about half the shelves in the Corunna Road store were empty and half-off signs were placed on some merchandise. Merchandise is not being restocked,

This marks the second closing in 10 years for the 60,000 square-foot store that formerly operated as a Farmer Jack grocery store which closed in 2005.

VGs, then operating as a Fentonbased, family-owned chain of stores, purchased the store in 2006 and sold it to Spartan Stores in 2008.