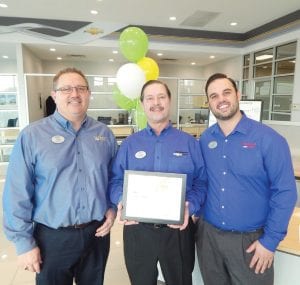 FENTON — Richard Canever, owner and president of Vic Canever Chevrolet, started working at his dad’s car dealership when he was 15. “I fell in love with the business,” he said. “I knew back then that this is the direction I wanted to go in my life.”

Canever did take his life in that direction and built on the successful business his dad started. Last week, he was recognized for taking that business in a green direction when Canever and General Manager Matt Stevens received the Green Dealer Program Award from General Motors. The award recognizes Vic Canever Chevrolet’s eco-friendly activities and practices including energy reduction, recycling, community outreach and management practices.

“This (award) was somewhat of a pleasant surprise,” Canever said. “We were making these decisions to do the right thing, not to get an award.” Canever credited his employees which number around 100, most of who were on hand when John Fitzpatrick, General Motors Zone Manager, and Stacey Summers, Chevrolet District Manager, bestowed the award at the dealership. “Everybody bought in. We wouldn’t have won this award without these people,” Canever said.

The dealership’s eco-friendly practices will continue to reduce water, energy consumption and waste going to landfills. “We started doing this (green practices) years ago. We always make it convenient for people to do the right thing,” Canever said.

After 40-plus years in the business, Canever was looking for someone to share his vision for the dealership and promoted Stevens to the general manager position. Canever’s son, Jeff, is part of the management team as well, serving as sales manager for the dealership.

Canever’s affection for his customers and his team showed as he smiled wide and thanked both groups during the small celebration of Green Dealer Program Award. “This is the perfect business to be in if you love people,” he said. Vic Canever Chevrolet is showing the love to both the people they serve and the planet we share.