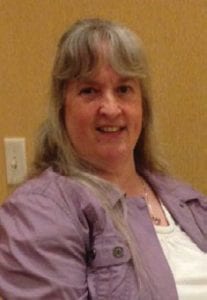 The Special Recognition awards are just two years old and something MIVCA felt important to allow its members to recognize those not directly involved in coaching. The third award went to the Hall of Fame Inductee for the year, 29-year middle and high school volleyball coach Ron Stremlow of Forest Area. MIVCA member Jean LaClair introduced the nominators for the Special Recognition Award who spoke on their nominees, then the nominees addressed the audience. Along with Paine, Sharon Schatz, National AAU Sports Chairman for Volleyball, was honored.

Before presenting Paine her plaque, Fish spoke about high school volleyball and why he nominated Paine.

“Volleyball isn’t a marquee sport,” Fish said. “Listen, when you’re up against football, volleyball is played in the fall now, you just aren’t the marquee sport. Lisa does a great job with our volleyball team and our sports in general. I brought some examples of her work, some of my favorites, that I have hanging on my wall. This is a full page from when we won the state title in 2014, this is another full page on our team and this one is special to me. It’s a poster of my daughter Jordan when she won Miss Volleyball. I didn’t found out about it until that Sunday at church.”

Fish went on to explain that the View Newspaper Group handles 14 papers each week and Paine is responsible for nine of those covering 22 high schools over three different counties.

“The great thing is that Lisa doesn’t care if you won or lost. She does a great job getting all the sports into the paper, the boys’ sports and the girls’ sports. It doesn’t matter if they are the marquee sport or one of the less popular sports. She’s always done a great job over the years recognizing our student-athletes on and off the court.”

In Fish’s nomination letter to MIVCA Fish remarked of Paine, “She takes painstaking measures to make sure all schools get fair and consistent coverage… She truly cares about the student athlete and promoting all that is good about sports.

Paine said she found it interesting that the MIVCA speakers at the banquet noted they felt that volleyball was not considered a marquee sport and that everyone being recognized was in some way involved in keeping volleyball in the spotlight through coaching, athletic directing or at the levels building up to the varsity level.

Noting Fish’s examples, Paine also spoke to the audience about the relevance of print in a digital era.

“A lot of people say that print media is dead. It’s not,” Paine said. “We pride ourselves on recognizing that print media in this day of social networking and online news is still of value to people. Our research has proven that out and it’s our pleasure to provide that print edition that so many of you still want to sit down and feel and read.”

Many in the audience nodded with approval.

“It’s job security for us,” Paine added. “Take this message back to all your athletic directors and coaches; work closely with your local papers like Jim does.”

“I want to thank Jim again for the nomination and it’s humbling, and an honor, to be recognized for the work that we do,” Paine said.