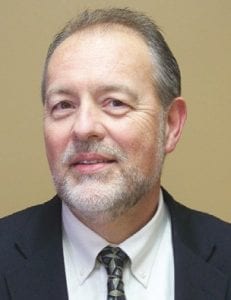 LAPEER — Wes Smith began his career in the newspaper and printing industry at the age of 16 at the Almont Times Herald. At the small shop he was exposed to all aspects of the business, where he did writing of high school news and was first introduced to the printing side of the business.

Forty years later, Smith, 55, has been named publisher of the VIEW Newspaper Group that each week publishes 13 newspapers in Lapeer, Genesee, Huron, Sanilac counties and mid-Michigan.

“It’s quite an honor. I’ve always loved the newspaper business, and it just so happened that I landed on the print side of the business,” said Smith. “We are dedicated to community journalism in every sense of the word, and I look forward to continuing our mission to provide local news like no one else can.”

Smith grew up in Dryden and later moved to Lapeer, graduating from Lapeer High School. In his senior year he went to work at The County Press where he began in the mail room sorting newspapers among other duties.

In 1986, Smith became general manager at Webco Press in Lapeer where he spent the next 30 years growing the business, eventually selling to Rick Burrough who owns Michigan Web Press in Davisburg. Burrough also owns the View Newspaper Group based in Lapeer.

“It’s exciting to have someone like Wes who has the sense of the community and is actively involved here with his family. Having Wes in the publisher position emphasizes our mission to bring solid, local coverage to all of the communities we serve,” said Burrough.

Smith comes from a long line of newspaper people. His father-in-law is Jim Fitzgerald, former editor of The County Press and Detroit Free Press columnist, his sister-in-law is Karen Fitzgerald, an account executive at the Flint Journal and brotherin law Ed Fitzgerald, a staff writer at The Macomb Daily.