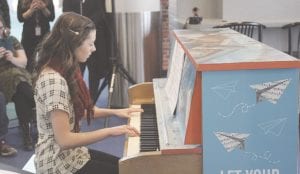 Student Allie Fulton gives a performance on the piano during the press conference held Tuesday. Photos by Gary Gould

FLINT TWP. — Waiting for a flight at the airport can sometimes be long and tedious. Now there’s something for those musically inclined to do to pass the time away.

The Flint School of Performing Arts (FSPA) in collaboration with Flint Bishop Airport, unveiled a piano available for those waiting outside the boarding area to play on – whether they have musical talent or just want to play around.

The FSPA has previously donated two pianos, currently being enjoyed at the Flint Farmers Market and Genesee Valley Mall.

Davin Pierson Torre, director of the FSPA, said the organization is excited to continue giving back to the community through the power of music.

Torre said while visiting France with a group of students from the FSPA they saw public pianos were common in many shopping areas and airports.

“We thought ‘why not in Flint?’,” she said. “The other pianos we’ve donated are played daily at the other locations.”

The piano donated to Bishop International Airport by the Flint School of Performing Arts. The piano was painted by Flint artist Isiah Lattimore.

The used piano was given new life by new life by Flint artist Isiah Lattimore with what the FSPA describes as “a whimsical and colorful makeover.”

“The possibility of flight has always captivated human imagination,” said Lattimore, in a FSPA press release. “The combination of innovation, creativity, and fantasy are as prevalent in aviation as they are in music or painting. I drew inspiration from these concepts while working on this project.”

Bishop Airport Director Craig Williams said from the time it was announced the FSPA would be donating a piano, he hoped it would be painted to reflect an aviation theme, to tie in with the airport.

“This represents the airport well,” said Williams during the unveiling ceremony. “It’s a very nice, relaxing way for people to spend their time while they’re here.”

Torre said the piano project is the latest effort by the FSPA to get people involved in the arts outside the confines of the classroom or home.

“I have traveled through dozens of airports and I can’t tell you how wonderful it is to hear someone playing the piano. I am thrilled we will now be able to share this form of live music with our passengers at Flint Bishop,” said Williams, in a press release. “The positive impact that something as simple as a piano can have on the community is truly transformative.”

Torre said the FSPA anticipates the donation of a fourth piano sometime in the future, but a location has not yet been decided.