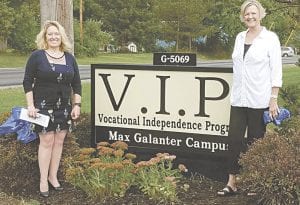 From left, Rene McMann, Executive Director and Jeanne Quinlan, Board Secretary, with the new sign in front of the Vocational Independence Program.

For many people, the work they do is a defining factor of their character, said Rene M. McMann, director of the program.

“But having a job means even more to the most vulnerable of us – it means independence,” she said. “The Vocational Independence Program (VIP) Work Center is a place where adults with disabilities participate in vocational training, social and living skills and work to secure employment through one of our many work programs.

At the open house, the board of directors and staff dedicated the facility to Max Galanter. Galanter was the Executive Director of the non-profit organization since 1974. The organization itself has been around since 1954.

McMann said Galanter found his career at VIP to be very rewarding. He was there for more than 40 years and experienced a lot of changes, she said.

In 2009, the organization’s name was changed to Vocational Independence Program. There were just 40 participants when Galanter came on board in 1974 and that number has grown since.

The number of buildings has grown from one to 10, and there are many training programs offered, as well as work programs in which participants are paid minimum wage.

“Max loved his job and gave everything to VIP,” said McMann. “Today, we want to recognize his contribution by honoring him.” — G.G.