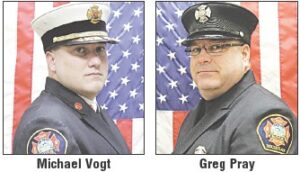 Greg Pray, who hired onto the Burton Fire Department on Oct. 2, 2012, has been named to replace Vogt as assistant fire chief.

Pray, a former Davison police officer, was promoted to lieutenant on the night shift at Fire Station No. 2. Back in July.

Mayor Duane Haskins made the announcement at the Oct. 4 city council meeting and said he was sad to see Vogt leave.

“It’s bittersweet to see him go,” said Haskins. “He was a huge asset to our city.”

Haskins said Pray would be welcomed in his new role and wished him well in his new endeavor.

Vogt was recently introduced to the Lapeer City Commission and public. He replaced Chief Terry Kluge who will officially retire in mid-December after 25 years of service with the fire department.

Vogt has more than 19 years’ experience in the fire service. He will start work at his new job Oct. 12.

Vogt was selected from a group of four finalists, including one internal candidate.

The County Press in Lapeer contributed to this report.