Voice of the Cavs 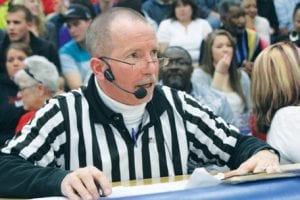 Tom Klee announces the game and keeps the scorebook, but that’s not all he brings to Carman-Ainsworth sports.

FLINT TWP. – Tom Klee always did enjoy talking into a microphone, starting with his first career in the advertising business doing voiceovers for commercials.

Once he moved into teaching, he found a new outlet for his talents.

Klee is the unmistakable voice of Carman-Ainsworth High School sports, the energetic and enthusiastic announcer you hear at all Cavalier football and basketball home games. He’s been doing the job with passion for 14 years, shortly after he came to Carman-Ainsworth as a business marketing and business computers instructor.

Klee puts a lot of time into his sideline, announcing every varsity football game and every varsity, junior varsity and freshman boys’ basketball game at home. If the girls are playing at home on the same night, Klee will announce their game as well. When spring rolls around, he calls as many girls’ soccer games as he can. In the fall, it’s boys’ soccer, in addition to the football.

But it’s more than his time. Klee puts his heart into the job and strives for a professional atmosphere every night.

“When I first started, (then basketball coach) Bob Root told me, ‘Just respect the kids and respect the school.’ I’m a true Cavalier at heart. I’m not about to disrespect any kid or the school,” said Klee, a 1978 graduate of Ainsworth High before that district merged with Carman.

“I just want to make it a community environment. I want to make sure the fans there understand the game better and help the players get excited about playing in their own gym, or their own field.”

About three years after he started, the creative Klee began to embellish. The Cavs had a particularly good basketball team with Scott Richardson and Aaron Lawler, and Klee did his best to ratchet up the excitement during pregame introductions.

“One night I decided to call the kids out from all over the country, and bump up their heights,” he said. “A 6-foot-3 player would become a 6-foot-5 forward from Omaha, Nebraska. A 6-foot-1 kid would become 6-foot-3 from New York.

“People would look around, wondering where these kids came from. Visitors would ask if we were recruiting.”

The announcements would ring off the walls of the packed gym, firing up the crowd and the team for the opening tip.

“The kids liked it,” Klee said. “They started asking where they would be from that night, or tell me they wanted to be from somewhere.”

The practice eventually spread to the referees, who also enjoy the glorified intros.

Still, Klee maintains a decorum of fairness and professionalism.

“You don’t disrespect the opposition or the crowd,” he said. “You have to be careful on the mike about talking at inappropriate times, and you don’t do commentary or play-by-play.”

Klee’s play-by-play is short and sweet. “Cam, for 3, from Justice” tells fans, in five words, that Cameron Morse just hit a 3-pointer on an assist from Justice Green.

He goes out of his way to pronounce names right, and if he gets one wrong, he apologizes on the mike – a practice that sometimes earns a bit of applause. Fans and coaches compliment him on his courtesy and style, and his reputation is widespread. On one road trip, the home athletic director asked Klee to announce the game in his gym. Another AD requested a copy of the national anthem he uses.

Which brings up another Klee specialty. In addition to announcing and keeping the scorebook, he brings a large catalog of music to play during breaks in the action.

“I play the stuff the kids want to hear when they’re warming up, after it’s been proofed and approved,” he said. “For the fans, I’ll go back to light rock and oldies, so that 35-year-olds and on up the ladder will be comfortable listening.”

Again, fans tell him how much they appreciate it.

Everyone appreciates the cookies Klee brings from his wife’s kitchen. Rossann Klee will bake nearly 20 dozen chocolate chip or sugar cookies that go to the players and anyone else Tom favors on a given night. (For the record, they’re delicious.) The goody bag also includes candy, gum and water bottles – all at a cost to Klee that’s barely covered by the stipend he receives for the job.

Fourteen years into it, Klee shows no signs of boredom or slowing down. The music, the cookies, the calls, the crazy intros will continue indefinitely, because the Voice of the Cavs still loves doing it.

“Until Bob Root tells me to stop,” he said.