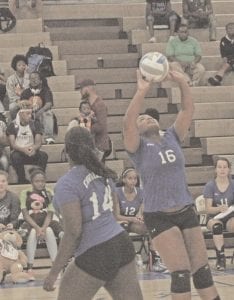 Carman-Ainsworth’s Amaya Campbell )14) watches as 16 (not listed on roster), prepares to set the ball on September 12.

Carman-Ainsworth had a match with Saginaw on Tuesday evening, but scores were not reported at the time of press.

The Cavaliers went 1-2-1 in the Mount Morris Tournament last Saturday, ultimately losing in the Gold Division Quarterfinal to Valley Lutheran 16-25, 17-25.

Diamond Lester led the Cavaliers with 23 kills, 24 digs, seven aces and four blocks over the course of the tournament. Destiny Johnson added 14 kills and four blocks. Emily Carroll had 13 kills. Katie Speaks led the Cavs in digs with 48. Mary Dollinger also had 44 digs, and Morgan Sherrer had 27 digs of her own.

“Overall, I thought we played really well with a lot of enthusiasm and intensity on and off the court,” said Carman-Ainsworth coach Barb Hurand. “We were the true definition of team (on Thursday) no matter what the players roles were. It was a great match!”