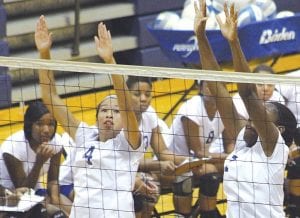 Carman-Ainsworth’s Kayla Tigner (left) and Deja Lester go up for the block.

FLINT TWP. — Carman-Ainsworth hosts the Class A volleyball district with Lapeer East taking on Flint Kearsley, Tuesday, Oct. 30 at 6 p.m. On Nov. 1, Lapeer West goes toe-to-toe with the host Cavaliers at 5 p.m. and Davison gets the winner of East/Kearsley from Tuesday. The title is decided Friday, Nov. 2 at 6 p.m.

The Cavaliers will face a Panthers’ squad that is currently second in the Flint Metro at 23-21-8, 7-1 Metro. Lapeer East has a good shot of getting past a struggling Kearsley squad with Davison getting the winner. 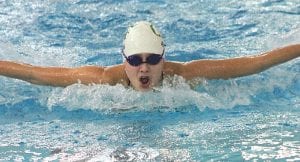 Next up was Traverse City Central, which split with the Cavs, 26-25, 24-26. Smith had 11 kills, was 100 percent on serve, and was 9-of-9 on serve receive, along with six digs, McClung had six kills, two digs and five serve-receives and Breanna Hudson chipped in with three kills. Deja Lester tallied four kills, Colby had two kills, six digs and 12 serve-receives, Tigner had 25 assists and three digs and Kali Jackson had three digs.

In their final home meet of the 2012 regular season, Carman- Ainsworth/Flushing lost to Bay City Western, 116-70, on Oct. 18. Grabbing the Lady Cavaliers’ only win of the day was Jennifer Messina in the diving competition, Rebecca Hrit, Ashleigh King, Selena Adams and Messina were second in the 200 medley relay in 2:09 and in the 100 fly, King was second in 1:17 and Adams was third in 1:18. Messina, Allia Howard, Rebecca Bade and Kayla Seeley were also second in the 200 free relay in 1:55.75, in the 100 free Howard was second in 1:01 and Mara Johnson was third in 1:03. Finishing second in the 400 free relay in 4:17 were Adams, Howard, Seeley and Hrit.