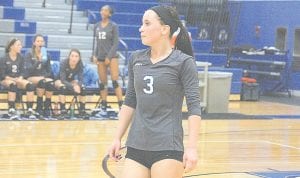 NEW LOTHROP – The Carman-Ainsworth volleyball team finished 1-3 in the New Lothrop Varsity Tournament last Wednesday, but still was able to give Rogers City, the tournament’s top seed, a scare. The Cavaliers lost to Corruna and Byron in pool play before eventually beating Kearsley for this first victory. Earning the 8th seed, Carman- Ainsworth met Rogers City in the first elimination round.

After falling in the first game 17-25, the Cavs fought back and won 25-19, forcing a third, decisive game. However, they couldn’t get over the hump and fell short 17-19, advancing Rogers City to the next round.

“We were in position to win every match,” said head coach Barb Hurand. “Our overall record is 1-6-2, and although I’m disappointed we don’t have more wins, it’s early… Things are starting to come together and our team goals are set high.”