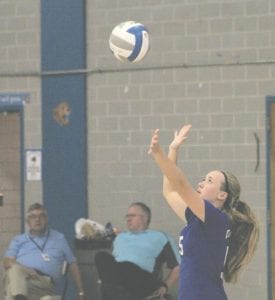 Katie Speaks sets up her serve during a match on Sept. 12.

SAGINAW — The Carman- Ainsworth volleyball team lost to Saginaw Heritage 23-25, 18-25, 20-25 Tuesday night. The Cavaliers were led by Morgan Sherrer, who had 20 digs. Emily Carroll had six digs and five kills and Mary Dollinger had 10 digs and seven assists.

Over the course of the tournament, Sherrer led the Cavs with 54 digs and 13 aces. Katie Speaks had 52 digs and nine aces. Dollinger led the team in assists with 44, while also having 30 digs. Aniya Harmon had 40 assists, 13 digs and seven blocks. Diamond Lester had 37 kills, 38 digs and 14 aces. Destin Johnson had 25 kills and eight blocks. Hannah Thurston contributed 14 kills and 40 digs.

“We went to Clio to win and we are disappointed in how we played during the tournament,” said head coach Barb Hurand. “Although we did have some great moments, we struggled with consistency. We have to control the ball better on our side of the court. The good thing about this team is that we’ve set our goals high this season. We may have been knocked around a bit on Saturday, but that makes us more determined to continue to work hard to improve on the areas where we are struggling so that the wins start coming. Sometimes it just takes some time to finally figure it out.”