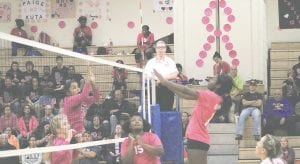 Carman-Ainsworth’s Destiny Johnson, right, rises up for a shot at the net last season, while Aniya Harmon waits in the wings. Photo by Brandon Pope

ROMEO – The Lady Cavaliers went 2-3 in the Romeo Varsity Volleyball Tournament on August 29. Carman- Ainsworth’s run through the tournament ended in the Silver semifinals, where it lost to Rochester 26-24, 7-25, 10-15.