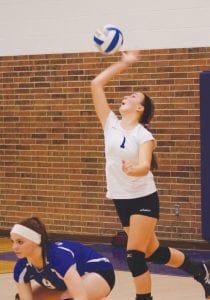 Sarah Thurston had another good outing at the New Lothrop tournament last week.

“We had a lot of matches early on this season with lots of bugs to work out,” coach Barb Hurand said. “We are showing improvements in areas, some areas bigger than others.

“We know that we need to improve every time we compete and we are doing that. The exciting thing about our team is we are super athletic and super eager to learn and improve.”