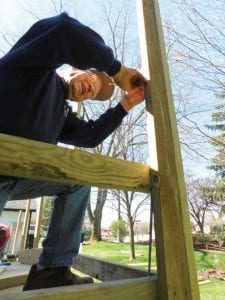 FLINT TWP. – Veletta Damon was eager to show her grandson, Jake, the new wheelchair ramp outside her home.

Volunteers recently assembled at Damon’s home in South Valley Estates and spent the morning building the ramp she needed to get her grandson, daughter and husband in and out of the house safely.

A second build, at the nearby home where Damon’s daughter and grandson live, will also take place.

“When I saw the story in Swartz Creek View, and I saw the angle of that ramp they were using, I thought ‘that’s an accident waiting to happen,’” said volunteer Hazen Germaine of Flint Township.

Germaine is part of a group from First Presbyterian Church of Flint, who donate their time to build ramps. He worked with Marty Phillips of Flint, Russ Sorenson of Otisville and Rick Brown of Otisville.

He and Phillips were able to pull together some left-over materials from previous builds in order to get the job done.

Additional help came from the United Way and UAW, as well as Michigan Lumber and Tri-City Construction.

The projects, as well as an effort to convert a bathroom, were coordinated by Pastor Keith O’Neal and his organization, Good Samaritans of Mid-Michigan.

“We have a two-phased goal,” said O’Neal. “We want to build the ramps and attempt to make Jake’s bathroom handicap-accessible. We need a lift and some other things to make it so they can get his chair in the bathroom.”

Damon, a retired nurse who recently beat breast cancer, takes care of her husband, who has epilepsy and has suffered one heart attack and two strokes, her daughter, Lisa, who also has epilepsy; and Jake, who has Von Willebrand disease and angiohemophilia, and is quadriplegic.

The Damons had proper wheelchair ramps at their previous residence in Mount Morris Township, which went into foreclosure because of mounting medical bills.

They were using temporary, metal ramps that were at an unsafe angle, and Damon did not have the strength to push her grandson up the old ramps alone.

“Jake loves to go to Youth Group on Wednesdays,” she said. “He would be so disappointed, and his face would just drop, when I would have to tell him that we couldn’t take him because I didn’t have anyone to help me wheel him back up the ramp.”

Germaine said the appreciation of the family is very rewarding.

“That’s what makes this all worthwhile,” he said. “We built a ramp for one woman and, when we were done, she rode her wheelchair up and down the ramp and shouted, ‘I’m free!’ That’s what it’s all about.”