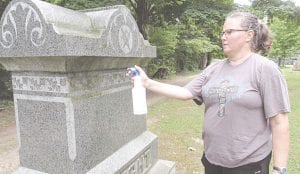 Jean Herta sprays a Knight family monument in Cronk Cemetery with D/2 Biological Solution. Herta and Karen Barnes are using the solution to clean the gravestones and monuments of the approximately 505 graves in the Flint Township Cemetery. Photos by Jalene Jameson

FLINT TWP. — Gravestones and monuments that have sat for decades in Flint Township’s Cronk Cemetery are getting some tender loving care from a pair of volunteers.

Jean Herta, a math teacher at Saginaw High School, and Karen Barnes, director of benefits for Flint Township, have volunteered to take on the project of cleaning the gravestones and monuments for the 505 graves in the cemetery, most of which were set during the 1800s.

“I would say at least 60 percent of the headstones were installed during the 1800s,” said Flint Township Clerk Kathy Funk, who is keeper of the records for the cemetery. “There aren’t family members left to take care of the generations past, so we are making an effort to do that ourselves.”

While at the annual conference for the Executive Board of the Michigan Association of Municipal Cemeteries, Funk came across a salesman from Holland Supply Inc. in Holland. She had been looking for a cleaning solution for her husband’s grandparents’ headstones, and D/2 Biological Solution seemed like it just might work. There also was a speaker at the conference, Eric Hemenway of the Little Traverse Bay Band of Odawa Indians. 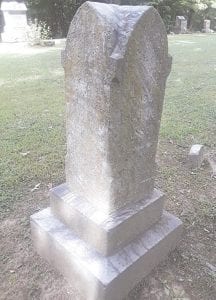 The Todd family monument in Cronk Cemetery was one of the first to be cleaned by Jean Herta and Karen Barnes. The before-and-after photos show the dramatic difference after being cleaned with D/2 Biological Solution. Photos provided by Kathy Funk

“He spoke very movingly about the care of generations past and the sacredness of honoring those who have walked before us,” Funk said.

Funk said she feels as though she “knows” the deceased of Cronk Cemetery because she has spent so much time entering all the information about them into the Township’s database. She said these experiences, coupled with the need to capture images of the stones before they weather away, made it clear it was time to start cleaning.

“I’m so thankful to Jean and Karen for their work,” she said. “It’s a beautiful thing to take care of someone in this way.”

Herta is a bit of a genealogy buff, having done research into her family ancestry, and became interested in caring for gravestones by cleaning the stones at her parents’ gravesite in Calvary Cemetery. 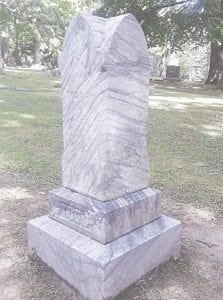 Mostly, she just loves the peace and quiet of the old cemetery.

Herta and Barnes both attend Holy Redeemer Catholic Church and have been friends for years, so Barnes volunteered to help with the work.

“Kathy just said she had the cleaner, and my friend, Jean, is very into genealogy and had talked about trying this new cleaner that’s out. So I sent her a message that I would help work on it,” Barnes said.

Herta started working on the stones Aug. 30, and the pair returned to the cemetery together and worked Aug. 31 and Sept 2. The next chance Herta had to get to the cemetery was Sunday, when she worked on a trio of small gravestones belonging to the Beecher family and a 5-feet-tall monument for members of the Knight family.

She used a plastic scraper to scrape off mold, mildew and lichens, then sprayed the stone down with the D/2 solution, which is safe for humans and vegetation. After letting it sit for about five minutes, she used a soft-bristle brush to scrub the dirt from the stone. Names and dates that had been unreadable minutes before could be seen clearly after the stone was rinsed wih water.

“I used to use just water, but this stuff is amazing,” Herta said. “It’s important to know that you shouldn’t use soap or bleaches on the stone. There’s one big stone here that looks like someone might have sprayed it with bleach, and now it has ridges running down it. The stone is really porous and absorbs moisture, so soap and bleach can damage it.”

Most gravestones and monuments are made of limestone, sandstone, granite or marble. Because the stones are so porous, the D/2 solution works its way into the stone and continues to work overtime to help keep the stones clean. Herta said the D/2 requires a lot less scrubbing and makes the job easier.

Herta loses track of time when she’s working on the stones and can spend three or four hours in the old cemetery, which is nestled into woods on three sides. Barnes said they’ve probably cleaned 30 to 40 stones, and they will continue working until winter weather forces them to stop. Then they’ll begin again in the spring.

Signage marks out sections of the cemetery, but Herta said she doesn’t have a method mapped out for the project.

“There’s no rhyme or reason to it,” she said. “I just pick the dirtiest ones.”

Funk said the cost of the D/2 solution to do the entire cemetery will be about $200.

“But it’s priceless to be able to clean the headstones and then capture the image of the name off the headstone where, to the naked eye, it looks too worn to read.”

Funk said one of the first things she did when she was elected clerk was purchase workable cemetery software. The records for Cronk Cemetery have been updated, and Funk’s staff is in the finishing stages of entering records for Bristol Cemetery. Eventually the records will be put online with information and mapping and made available to the public.