Volunteers spent Sunday morning and afternoon painting the bleachers and railings at the Bendle football stadium.

BURTON — A group of about 20 volunteers, including parents, students and even the mayor, helped give the Bendle High School football stadium a fresh look with paint and flowers, Sept. 19

Dawn Pully, a parent of a Bendle student, helped organize the clean-up which was held Sunday. Volunteers spent the day painting all the bleachers and railings, the stadium bathrooms, the ticket booth and planted some flowers at the site.

Pully, a Bendle graduate herself who works for Bendle Public Schools, said additionally there were plans for two graduates to return on Monday paint murals on the bathroom walls.

As for the painting of the bleachers and railings, Pully said they planned to have it done in one day.

“We’re hoping to get it all done today,” she said.

She thanked the community for its help and for donations of supplies needed for the clean-up project. 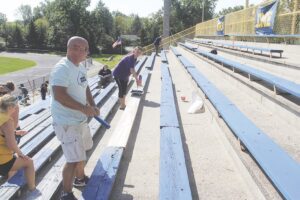 She said Margarita Riley was the one who came up with the idea of holding a clean-up event and Pully said she spearheaded things from there.

Burton Mayor Duane Haskins, who was hard at work painting bleachers, said he doesn’t think the stadium has had a fresh coat of paint since his own son attended there 11 years ago.

Pully thanked everyone for the help and for all the donations.