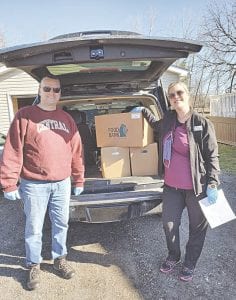 Layne Lucia and Kali Varner are among the volunteers who make sure local seniors have food every month. Courtesy photos

Linda Bair is accustomed to staying home, so when Gov. Gretchen Whitmer issued the “Stay Home, Stay Safe, Save Lives” executive order, Bair’s first thoughts were not about being bored; rather, her mind went to a very basic fear: hunger.

Bair, of Swartz Creek, relies on the food boxes delivered monthly by a small contingent of volunteers.

“I was definitely concerned,” said Bair, 73. “I’m on a fixed income. I get Social Security, but by the time you pay your rent and get your prescriptions, there’s nothing left for groceries. That’s just the way it is.”

Lisa Church, office manager at Alternative Elderly Care, heads up the volunteer crew which works through the Food Bank of Eastern Michigan to make sure 34 senior citizens throughout Genesee County have access to nutritious foods.

“The reason they qualify for the program is they are a seniors and low income and, for the most part, they are homebound,” said Church, of Davison Township. 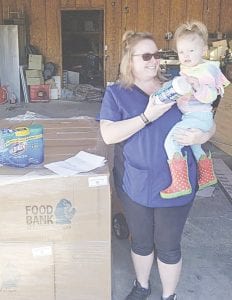 Lisa Church gets some love from her daughter, Emma, before heading out to deliver care packages to area senior citizens.

Some of the volunteers were concerned about doing the deliveries this month, she said. Most work in healthcare, which already puts them at greater risk than the general public.

“We thought about maybe not doing it,” said Church. “But we called every one of our seniors, and not one said they’d be alright. They need the food and the supplies. So, we just got out our masks and gloves and disinfectant spray and we got it done.

“After talking to the seniors and confirming just how desperately in need they were, there was no way we could say no.”

For Bair, that delivery was a blessing.

“That (the food box) is my only source of food. If they quit delivering it, I’d have no way of getting it. And they’re really nice people. They don’t ever look down on you. I’m proud to know them. It does me a lot of good. If I didn’t have (the food box), I don’t know what I’d do, because I don’t have the money to go grocery shopping, and I’m not the only one in this situation.”

The food bank delivered the provisions and supplies to Church’s home a week before this month’s distribution “so they could sit outside untouched in case there was any contamination,” she said.

“That provided (the seniors) with a lot of assurance, knowing we were taking every precaution, knowing we weren’t bringing something (viral) into their homes,” Church said.

“Anyone with neighbors who are seniors, please keep checking on them, especially the vulnerable ones,” said Church. “They’re not OK. They’re scared. They’re terrified. They have no way of getting the supplies they need.”