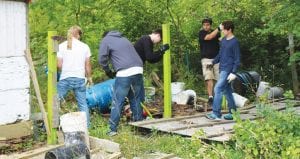 Volunteers work in the rain to clear mounds of debris from the grounds where PAWS animal rescue hopes to “Raise the Woof.” In April, the Clayton Township-based no-kill shelter purchased the property on Elms Road in Flint Township.

FLINT TOWNSHIP — The weeds were four feet high, growing through old tires and mounds of cinderblocks from collapsed buildings.

Rain fell on a broken windshield and the rusted shells of three ancient pop-up campers. The rotting privacy fence couldn’t hide the piles of broken glass and debris.

It was an effort to bring order to the chaos at the 3 ½-acre parcel of land which was purchased by PAWS (Pets Are Worth Saving) in April.

The plan is for PAWS to construct a modern facility on the site. It will provide temporary living space and medical areas for homeless pets awaiting adoption.

But first, the trash must go. And there’s a lot of trash. 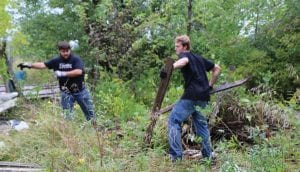 Saturday marked the 7th weekend this summer that volunteers from Sigma Nu have provided support to the community including help with the Crim cleanup and a visit to an assisted living facility. So why PAWS?

“Our members wanted to support animal rescue efforts and by focusing on a smaller organization we felt we could have a greater impact” said Malek, president of Sigma Nu and organizer of the event.

He added that his fraternity has a shelter dog and they hope to foster homeless pets in the future.

Volunteers worked steadily in the rain, filling a 20 yard dumpster and taking down the rotted privacy fence. Tires were stacked in neat rows for removal later. As cleared areas began to emerge, Kathy Wiget, of PAWS, pointed out: “These people are the future of animal rescue. I can’t tell you how much it means to have their support. We are deeply grateful.”

It would appear that the future of animal rescue is in good hands. If you’d like to be a part of the future of PAWS, or to donate money for the construction of the new facility, visit the website at www.pawsanimalrescue.net or mail donations to PAWS Animal Rescue, PO Box 87, Swartz Creek, MI 48473.

Include ‘Raise the Woof’ on your check or money order.