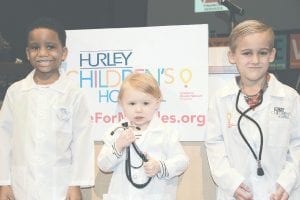 Three of Hurley Children’s Hospital’s “Miracle Kids” were on hand to help accept two checks after winning the #VoteForMiracles contest. Will Morgan, 6, of Flint, Hadlee Deines, 3, of Durand, and Easton Clark, 5, of Goodrich, attended the celebration held at Hurley Medical Center on Monday, Jan. 30.

FLINT — Children’s Miracle Network Hospitals and Credit Unions for Kids announced five winners of the 2016 #VoteForMiracles contest, with Hurley Children’s Hospital walking away with the top prize of $50,000 from CO-OP Financial Services. Over the course of 22 days, almost 300,000 votes were cast for 141 CMN Hospitals. In addition, members representing more than 2,500 credit unions cast votes during the campaign.

After tallying 43,375 votes, Hurley Children’s Hospital in Flint was awarded a check for $50,000 — plus an additional $10,000 gifted to Hurley from the Sheppy Dog Fund by Grand Blanc Pediatric Dentist Dr. Alan Klein, who is on staff at Hurley. The funds will go towards the new Pediatric Private Patient Rooms initiative. Once the project is completed, Credit Unions for Kids and CO-OP Financial Services will be recognized with a plaque commemorating the gift. On Monday, Jan. 30, a special celebration was held in Merliss Auditorium at Hurley to help commemorate Hurley’s success. 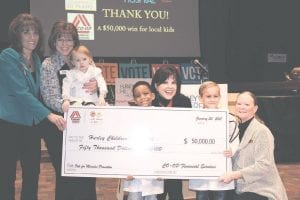 After receiving 43,375 votes, Hurley Children’s Hospital in Flint was awarded a check for $50,000 from CO-OP Financial Services on Monday. In addition to the $50,000, Dr. Alan Klein, a pediatric dentist on staff at Hurley, donated $10,000 to the hospital for winning the #VoteForMiracles promotion. The funds will go towards the new Pediatric Private Patient Rooms initiative.

“We are so appreciative of all that credit unions have done for Hurley Children’s Hospital over the years,” said Melany Gavulic, the president and CEO of Hurley Medical Center. “We are delighted that we could use Vote for Miracles to not only raise much-needed funds for our hospital but also tell the amazing story of the credit unions’ generosity through the Credit Unions for Kids program.”

“The Vote For Miracles campaign helped CO-OP Financial Services reach their goal of bringing awareness of credit unions in the community, as well as awareness of hospitals in our communities,” said Sarah Canepa Bang, the executive vice president of industry relations with CO-OP Financial Services. “We are delighted to see that Flint has won, and we want to make sure that people understand what credit unions have been doing for the past 20 years in terms of raising money for local children’s hospitals. And that’s to the tune of about $150 million over the past 20 years. That’s not small stuff. That’s big stuff.”