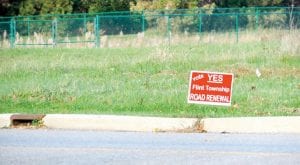 FLINT TWP. — Township voters were in a generous mood Tuesday, approving both millage renewals by nearly two to one margins.

Voters narrowly turned down the same millage renewal request in May with 51 percent against it and 49 percent in favor,

Both millages were due to expire at the end of this year.

First approved in 2006, the .50 road millage renewal is expected to generate an estimated $399,200 in its first year. It funds a variety of road needs including ditching, lighting, repaving and chloriding.

Road millage funds paid for about $5 million in local road work over the past ten years, according to township officials. The .25 mills Fire Equipment millage is expected to generate about $199,600 in its first year. It will pay for fire trucks, breathing apparatus and other safety equipment.

Township officials did not respond to a request for comment on the election results.