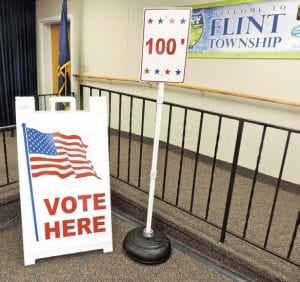 VOTING VISUAL AIDS – Voters should have an easier time knowing where to go during the upcoming August 2 election thanks to new signage, which Clerk Kim Courts previewed at the township board meeting this week. One is a color-coded map showing precincts. It will be located inside of the doorway of polling sites. Another is a “Vote Here” sandwich board sign that has reflective letters to be more visible to voters who come early in the morning or after dark. Some voters have complained about not being able to see the old signs, Courts said. Pole signs marked 100’ (shown) and 20’ will designate the area that campaigners and exit-poll takers. respectively, must stay behind. Vertical blue banners will be placed at two polling sites to remind voters to turn off their cellphones and have their ID handy. Those will be placed at Our Lady of Lebanon Church on Calkins Road and West Flint Church of the Nazarene on Dye Road. Courts also cautioned voters to remember that selfies are not allowed inside the polling place. Anyone seen taken a photo could have their ballot removed.