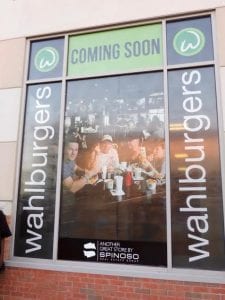 By Rhonda SandersActor Mark Wahlburg made an appearance, via satellite feed, at Mo Peeps in Flint Township[, Thursday, to announce plans for a Wahlburgers restaurant at Genesee Valley Center.

FLINT TWP. —A Wahlburgers restaurant will be opening some time in the fall at Genesee Valley Center mall.

That was the big announcement made Thursday by mall officials during its weekly concerts at the mall event.

Owned by actor Mark Wahlberg and his family, the Boston-based casual dining burger chain has two other Michigan locations in Detroit and Taylor.Mark Wahlberg personally announced plans for the Flint Township location, appearing on a screen via satellite feed.. He gave a shout-out to his friend Morris “Mo Pete” Peterson for being instrumental in choosing the Flint location. Peterson, a retired NBA player, operates  “Mo Pete’s Sports Retreat, a restaurant and bar just steps away from the designated location for the new Wahlburger’s. Both are located in the Outdoor Village section of the mall adjacent to the Barnes & Noble bookstore.