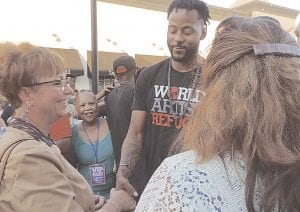 FLINT TWP. — Last week’s surprise announcement that a Wahlburgers diner will be opening in late fall is not the only big news coming out of Genesee Valley Center shopping mall.

Mall officials are very close to signing a new tenant to fill the anchor space vacated in June when the Burlington store moved to Miller Road. Marketing Manager Cindy Frohriep said they had hoped to be ready to reveal the new tenant during the special event last week when Wahlburgers was announced.

“We are this close,” she said holding her thumb and forefinger about an eighth of an inch apart,

In other big developments. Frohriep said the Forever 21 store currently located at the mall will be moving to a larger space in the Macy’s wing. The move will double its floor space, making it similar to the square footage of the H & M store which opened last November.

Also, currently under construction is Rogers & Hollands Jewelers, a family owned and operated company in business since 1910. It will be opening near center court. 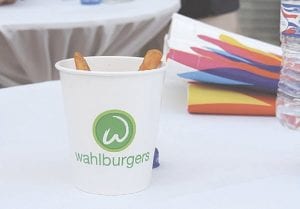 Samples of Wahlburgers and fries were served to VIP guests at the grand announcement event during the mall’s weekly Thursday outdoor concerts.

Wahlburgers will be opening in the Outdoor Village wing of the mall, in the space formerly occupied by a Talbot’s clothing store.

Owned by actor Mark Wahlberg and his family, the Boston-based casual dining burger chain has two other Michigan locations in Detroit and Taylor.

Mark Wahlberg personally announced plans for the Flint Township location, appearing on a screen via satellite feed. He gave a shout-out to his friend Morris “Mo Pete” Peterson for being instrumental in choosing the Flint location. Peterson, a retired NBA player, operates “Mo Pete’s Sports Retreat, a restaurant and bar just steps away from the designated location for the new Wahlburgers.

Carmen D. Spinoso, founder of SPINOSO Real Estate Group. an GV mall owner, was on hand for the big announcement.

“We love Flint,’’ he said to the crowd gathered to hear the announcement. “This is your mall and we are trying to make it better. It is the first (announcement) of many and one we have been working on for quite a while. We hope you will be just as excited as we are.” 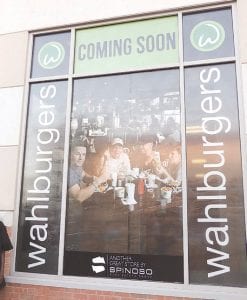 Wahlberg commented that when Spinoso and his team paid a personal visit to his home to pitch the Genesee Valley location, he thought he would have to convince them instead of the other way around.

“This is huge for us,” Wahlberg said. “I want to be part of the community. I want to bring my family experience to yours. We are very excited.”

Wahlberg said he considers Michigan as his home away from home, having fallen in love with the state while making a movie here.

He pledged to build the restaurant quickly and get it open soon.

“Hey mo. I will come to your place and you can come to mine,” he said to Peterson, whose sports bar is located in the same area of the mall.

“I wish I could be there right now.” Wahlberg said.

A mall spokesman said construction drawings for Wahlburgers are completed and will be presented to the township for approval in the near future – aiming for an opening in October or November.