SWARTZ CREEK — Many words were spoken, but one echoed over and over again.

“It is a great honor to have this wall in Swartz Creek,” said VFW Post 3720 Commander Ted Henry.

“For this now … it is a great honor,” said John Kayanek, commander of American Legion Post 294.

“This is great; that they are honoring all of the Swartz Creek area veterans, that they’re getting recognition, it’s just fantastic,” said veteran William Kleinedler.

“We want to honor all of our veterans and tell their stories,” said Dave Simancek, director of Child and Community Education for the Swartz Creek Community Schools.

Simancek is the man behind the Veterans Wall of Honor, which was dedicated May 23 at the Cage Community Center. The wall is available for viewing from 7 a.m. to 7 p.m. daily.

It took 20 months of work, meetings with the Department of Veterans Services, and a few setbacks, to accomplish the goal of creating a living memorial to they who served. 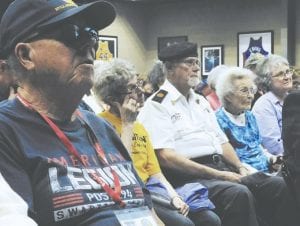 Veterans and their families listen as keynote speaker Kristine Palo Garcia shares some of her father’s memories of D-Day.

“We wanted a way for the schools, local organizations and the general public to partner to celebrate and pay homage to our veterans for their service,” Simancek said.

The cornerstone of the Wall of Honor is a digital display of photos and biographical information about 47 veterans of the U.S. Air Force, Army, Marine Corps and Navy, who lived in, worked in, worshipped in, volunteered in or otherwise had some connection to the Swartz Creek community.

Mike Hammond is one of the veterans featured on the wall.

“I think this is great,” Hammond said. “It brings attention to the fact that there are combat veterans among us. A lot of people served a lot of years.”

U.S. Air Force Veteran Chris Campbell said he’s happy to see such a positive representation of local veterans, and he believes the new memorial is a fitting complement to the Veterans Memorial park on Fortino Drive.

“Not every community has a veterans memorial, and we have two,” Campbell said. “I’m very proud of that.”

Campbell added that he’s proud that the Swartz Creek community values the people who made sacrifices to serve in the military.

Because the Wall of Honor is digital, it has the capacity to add thousands and thousands more veterans to the scroll.

“Right now, we have 47 veterans featured, as well as displays listing the donors and information on veterans’ services,” he said. “It’s not that difficult to stand here for the 12 minutes it takes to scroll through. But when we have 2,000 veterans, it won’t be that easy to stand here and screen.”

Simancek is still working on raising $5,000 to add an interactive kiosk to the Wall of Honor. The kiosk will allow visitors to key in a name to call up specific individuals.

Last week’s dedication ceremony included a keynote address by Kris Palo Garcia, whose father, Melvin R. Palo, was among the paratroopers who jumped into Normandy on D-Day, June 6, 1944.

Garcia shared some of Palo’s memoirs of the “glorious moment” when he met Gen. Dwight D. Eisenhower the day before that historic jump, and the fear and sickness he felt in the moments before the jumpmaster commanded, “Go! Go! Go!”

Garcia talked about her father counting down the seconds as he freefell, and the relief he felt when his parachute opened, only to whisk him into an orchard and snag him in a tree 20 feet in the air; and the fear and uncertainty of seeing, through the darkness, but one other soul, and not knowing whether he was friend or foe; and the rush of emotion at hearing the distant tolling of the church bells, which have become known as the Bells of Freedom.

Local veterans who wish to be included in the display, or survivors of veterans, may obtain additional information by contacting Carrie Burns, Outreach Services administrator, at the Department of Veterans Services, 810-257-3068. Applications also are available online under the “Community” drop-down menu on the school district website, www.swartzcreek.org, and at the Cage, American Legion Post and VFWAMVEST Post.