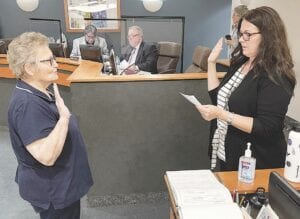 BURTON — Longtime community activist and neighborhood watch organizer Deb Walton was appointed Monday to finish out the term of Burton City Councilman Dennis O’Keefe, who stepped down earlier this month.

Walton, who has served the city on the planning commission, zoning board of appeals the police millage committee and master plan committee, will finished O’Keefe’s term which ends in November.

His seat will be on the November ballot.

Walton said she wants to be “that person” who brings everyone together, and while she might not always agree with the rest of the council she would listen to all sides and work with everyone to benefit the city.

Councilwoman Tina Conley asked Walton what her priorities would be if appointed to the city council.

“Number one, in my opinion, is the police department,” said Walton. “I feel when I did work on the millage, I felt our patrol people did not make enough money. I’ve seen what they deal with on a day to day basis and I felt like they aren’t being paid enough.”

She said she is also concerned about blight in the city, roads and helping see that city employees have decent wages.

“Our city needs help,” said Walton. “Our roads need help. And our employees, they need good wages also. We need to be fair, but we also need to take care of our community.”

“Sometimes I feel some people are out for their own agenda,” she said. “I really think we need to work together. All our residents are being left out and we need to help them. So, whether I’m on (the council) or not, I’m going to work for the community.”

Councilman Vaughn Smith said he’s worked with Walton many times over the years and admits they have not always seen eye-to-eye. Walton has often butted heads with council members with whom she did not agree with, but Smith said he thinks that good for forcing conversation.

“You’re a strong leader, you’ve chaired planning, chaired master plan, chaired police millage, chaired neighborhood watch, a member of the zoning board of appeals. You have been intimately involved in the city,” he said. “Everyone up here are strong leaders. For someone to do all of this you are obviously a strong leader. I know many times when you get that many leaders together, you’re not going to have smooth waters – and that’s good. Tell us how you’re going to mesh with us and work with all of our diverse personalities.”

“I would give you my opinion, but it’s just my opinion. We’re working together for the community, that’s the main thing,” she said. “Working to make it better for our people. It just seems like we’ve gotten so far away from each other and it never used to be like this in Burton. I want to be that person that brings us all together. If I’ve only got six months, then I’ve only got six months to try it.”

Two other candidates were not considered because one had not been a resident for a minimum of one year and the other could not be verified as a registered voter.

Walton, Fust, Rapacz, Welch and Peivandi were all in final consideration, but Walton received the minimum four votes needed to secure the appointment.

She was sworn in immediately after the meeting.

Look for the Burton View inside the May 20 Genesee County View for further details.