Warriors, Junior Generals to be under same umbrella 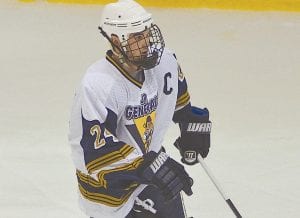 Andrew Lay of the Flint Junior Generals skates across the ice at Iceland Arena last season.

FLINT — Other than both teams playing in the same city, the Michigan Warriors and Flint Junior Generals didn’t have much of a relationship, if any. That could change soon, and possibly involve some sort of affiliation, as Firland Management, which already operates the Warriors, will now be in charge of running the Junior Generals.

Firland is a Maine-based corporation that is a key factor in the hockey business, often running arenas and teams throughout the country. There is no doubt that their presence helped the Warriors gain some sort of stability and even boosted attendance a bit this past season.

“The goal of this exercise is to form a synergy between the Warriors and Junior Generals and to maintain an NAHL team and an NA3HL team in Flint in a co-operative venture,” stated Jim Cain, President of Firland Management, during an interview with Randy Russon of JuniorHockey.com.

The current owners of the Junior Generals, Gale and Kelly Cronk, are interested in selling the team and Firland’s name may be in the hat for full ownership. The two squads are also connected by former Flushing hockey coach Jon Jepson.

Jepson, who is currently an assistant coach for the Warriors, also serves as the general manager of the Junior Generals while also managing the activity on the rinks at Iceland Arena.

If the partnership between the two franchises goes according to plan, the two teams could create a farm system of sorts, sending the standout players from the Junior Generals roster up to the Warriors roster in times of need. It could also go the opposite direction if certain Warriors are struggling, to give them some time to redevelop with the Junior Generals.

Although the Junior Generals’ schedule has already been set for next season, as they plan to continue their tenure at Iceland, rumors around the two franchises have led to speculation of a possible double-header with the two squads hosting on the same day at Perani Arena. On top of the potential affiliation, the Junior Generals have changed their longtime colors of blue and gold to blue and red to match the Warriors’ color scheme.