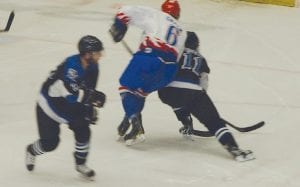 FLINT— The St. Louis Bandits fired several pucks on net Friday, but quality is often better than quantity. The Michigan Warriors were out-shot, 21-4, in the first period, but remained scoreless, as Lapeer native Robert Tadazak incredibly stopped all 21 shots. The Warriors picked it up a bit in the second. Robert Mantha dumped the puck into the St. Louis zone, as it bounced and found its way through Matt Green’s fivehole.

Davison native Joe Kalisz was tripped on a breakaway, resulting in a penalty shot. His moves didn’t fool Tadazak, but his shot nearly did, as it rang off the left post. Moments later St. Louis would get the equalizer, when Taylor Wolfe put the puck under Tadazak’s arm.

Overtime seemed imminent late in the game. With under two minutes in regulation, Brandon Boelter’s slap shot from the point soared into the net, giving the Warriors a 2-1 win in front of an estimated 1,258 fans.

The drama continued on Saturday, as St. Louis broke out to a quick 2-0 lead after a backhanded one-timer from Stephen Bopp, and a similar one-timer from Blake Edwards.

Those would be the only tallies until midway through the third. The Warriors finally got on the board when Justin Hoomaian won a face-off in the offensive zone and sent it back to Scott Henegar, who ripped a shot into the twine, cutting the lead in half. Just minutes later, the Warriors would capitalize on a power play when Ryan Green’s wrist shot from an odd angle found its way into the top shelf of the net, evening things at 2-2.

As overtime seemed to be an inevitability yet again, a Bandits power play in the final minutes led to Patrick Sheehan connecting on a one-timer to get the 3-2 win in front of 1,056 fans, and evening the series, sending it to a decisive game five at St. Louis.

Monday’s game five brought an early start for the Warriors. Just six minutes into the game, Ryan Green scored on the power play.

Michigan would add to that lead in the second period when Andrew Kolb lit the lamp. The Bandits’ Evan Stibbard would tally with the extra attacker, but St. Louis wasn’t able to duplicate it, as it fell to the Warriors, 2-1, in front of 774 fans.

The Warriors won the best-of-five second-round playoff series, 3-2. They now advance to a best-of-three series against the Bismarck Bobcats.