Washburn returns to the Jets for another season 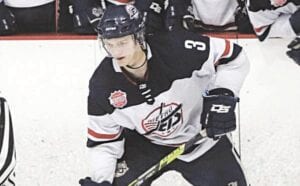 Davison’s Tim Washburn has re-upped with the Jets for his final season of junior hockey in 2021-22. Photo by Jilleen Hays

MOUNT CLEMENS — Tim Washburn suited up for the Metro Jets last season and quickly emerged as a leader on the MJDP squad.

One year later, the 2001-born Davison-native has re-upped with the Jets for his final season of junior hockey in 2021-22.

“Returning wasn’t really a long thought-out process,” Washburn said. “I enjoyed the year. Loved the coaches and players and ready to experience it again. Over the year, I really learned how to adapt and play with good players that have different styles to make a sturdy line and help our team win games.

“As one of the returning players, I want to show the younger players the depth this team and league have while providing them with a role model of worth ethic and discipline.”

During the 2020-21 season, Washburn recorded 19 goals and 39 points in 38 games, plus three goals and seven points in six USPHL playoff games.

“Tim re-signing is big news for a lot of reasons,” said Jets coach-GM Justin Quenneville. “He’s a pain to play against, he brings a level of intensity every shift that won’t be matched, and he has great instincts all over the ice. He quietly put up a point per game last year and scored some big goals, including playoffs. Not only is he strong on pucks, but he can make plays all over the ice. We look forward to working with him in his last year of junior and I know many schools will be excited to watch him play.”

Washburn also noted that the Jets organization is more than talented players on the ice.

“I think the Jets have a public face that shows helping out, whether it’s running little kids’ hockey camps or anything that involves our members giving back to the community,” he said.

This summer before heading to Mount Clemens Ice Arena, Washburn is going to work at a medical office, work out and keep skating to prepare for next season.