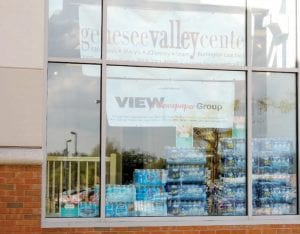 “The drive was incredible! We collected over 210,000 bottles of water,” said Kristen Cassabon, mall marketing director.

Cassabon said that cash donations would be used to buy additional cases of water for delivery to the schools.

Flint’s water crisis stems from city officials switching back to the Flint River as its water source in April 2014, ending a long-term agreement with Detroit as its water supplier. The switch anticipated connecting to the Karegnondi water pipeline from Lake Huron now under construction and targeted for completion by June 2016.

In response, on October 1, the Genesee County Board of Commissioners issued a Public Emergency Declaration and advisory to stop drinking water from the Flint River system.

Efforts began to issue lead filters to Flint water users. On October 8, Governor Rick Snyder announced a $12 million plan to reconnect Flint to the Great Lakes Water Authority (Detroit) as the source of its drinking water until the Karegnondi Water Authority pipeline is completed, Costs are expected to be covered by $6 million from the state, a $4 million grant from the Charles Stewart Mott Foundation and $2 million from the City of Flint.

It is expected to take about two weeks to restore Flint’s connection with Detroit water.

Water filters will continue to be supplied and water testing is ongoing.