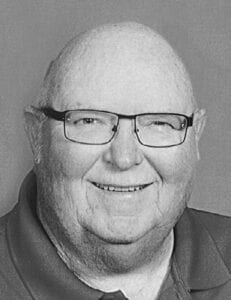 Wayne was born in Flint, MI on July 20, 1947, the son of the late Robert G. and Lenore (Duehring) Allen. He was a proud “East-Sider” and graduated from St. Mary’s Catholic High School in 1966. Following high school, Wayne entered the U.S. Army where he served during Vietnam from 1967 to 1970 in the 3rd Armored Division. He married his sweetheart, Margaret Bard, on December 4, 1970, at Holy Rosary Catholic Church. They just celebrated their 50th wedding anniversary. Wayne was interested in the funeral business since high school. He worked at Brown Funeral Home in Flint before entering the service. Upon returning home from the military, Wayne attended Mott Community College and served his apprenticeship at Reigle Funeral Homes. In 1974, Wayne graduated from Worsham College of Mortuary Science in Chicago, Illinois. Wayne and Margaret owned and operated Allen Funeral Home from 1987 until his retirement in 2009. He was a member of St. John the Evangelist Catholic Church, Davison Knights of Columbus Bishop Albers Council 4090, Davison American Legion Post 267, Safari International Club Life Membership, NRA Patriot Life Membership and “The Flat Tire Club”. Wayne spent his spare time helping various service clubs such as the Davison Odd Fellows, Davison Kiwanis Club and the Shriners Tin Lizzie Unit. He loved to hunt, fish and golf. Wayne enjoyed many trips with Paul and Jason to Chapleau, Ontario, Canada. However, his favorite place to be was at the “Farm” in Harrison. Wayne was a true “family man” and he loved, above all else, spending time with his children and grandchildren.

Wayne was a loving husband, father and grandfather and will be missed by all who knew him.